Good governance: Football is big business and needs to be run properly 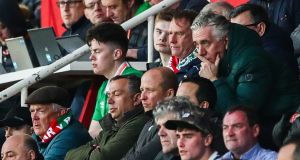 Bill Shankly, the late, legendary Liverpool manager, used to say a football team is like a piano. You need eight men to carry it and three who can play the damn thing. The man is 40 years dead but the quotes live on.

That one sounds deep, though in truth most companies with a product to sell, a performance to stage, a paper to publish, operate along similar lines.

But for Shankly it was all about the club’s “holy trinity” – the players, manager and supporters. “Directors don’t come into it. They are only there to sign the cheques”, he said. “And to press on with a bit of decent corporate governance. It’s a game of two halves really, going forward”.

No, he did not actually say the part about corporate governance. But imagine if he had. Imagine if he had sexed up that dreary term. Would the modern game look any different?

What would Bill say to John Delaney’s temporary €100,000 dig-out to his employer? “Small change in the great scheme of things,” as some pundits implied over the weekend? Probably not. That’s more than two years' salary to an average earner, the kind whose financial contributions, volunteerism and deep love of the game buttress every brick of the FAI.

Reared in a near-derelict Scottish mining village, Shankly often stole food to assuage hunger and at 14 left school to work down the local mine. Football provided an escape route but the second World War claimed his best playing years.

Even so, he was never short of gratitude for his sporting life. “Pressure is working down the pit. Pressure is having no work at all. Pressure is trying to escape relegation on 50 shillings a week. Pressure is not the European Cup or the Championship or the Cup final. That’s the reward,” he said.

How did we get from there to here ? When John Delaney runs out of FAI road, he could make a decent living conducting workshops.

Niall Quinn’s dismissal of any candidate for Delaney’s former job as a “gillie” – because it’s “only half a job” – would be a good kick-off point for the module on directors’ independence. Or as the Central Bank puts it more prosaically, “the ability to exercise sound judgment and decision-making, independent of the views of management, political interests or inappropriate outside interests”.

And since this debacle could be a good teaching moment, the “governance” page on the FAI’s website might be analysed as a model. Right now, it’s all about club governance. Information on the FAI’s own board and council appears on a separate page with lists of five board of management members – which acquired an actual woman sometime on Monday, aka Delaney’s interim replacement, along with an executive vice-president – along with six committee chairpersons (one woman again, who also happens to be the chair of the women’s football committee).

The 60 council members selected “from across the Irish football family”are a powerful bunch by this description. They elect the FAI president and a number of committee members and also pass “major decisions”. Yet they remain anonymous.

Football is not life and death. Nor is it war minus the shooting

All this is germane to why it took so long to bring John Delaney down to earth. Anyone with even a passing interest in FAI affairs has long been mystified by how the largesse available at HQ squared with the well-publicised financial woes around the League of Ireland, the paltry prize money and the travails of the senior international women’s team sharing tracksuits and getting changed in airport toilets.

It might be around this point where someone clears his throat for the defence and talks about vision, adding Shankly’s immortal line: “Some people think football is a matter of life and death . . . It’s much more serious than that.”

Upon which everyone weeps and has a group hug.

No. Football is not life and death. Nor is it war minus the shooting. In war, people die and there are no runner-up medals. In football, lads cry off training for a sore ankle. The only thing they have in common is that both are big business.

But it is this kind of macho nonsense that allows good people to gloss over dreary stuff like governance, director rotation, pay ratios and inappropriate sponsorships.

The FAI’s recently-signed deal with Sportpesa, a Kenyan betting company, sees the latter ranking proudly along side other official FAI sponsors such as the Department of Foreign Affairs and Trade on the website. This is while another arm of government is busily drafting the heads of a long-delayed, much-needed Gambling Control Bill.

As for that Shankly quote about life and death, this might be the week to recall its context.

It emerged on a chat show when he was talking regretfully about the strain on family life caused by his constant work absences. “I regret it very much. Somebody said, ‘Football’s a matter of life and death to you.’ I said, ‘Listen, it’s more important than that.’ And my family’s suffered. They’ve been neglected.”