Kathy Sheridan: Context is all when it comes to republican symbols

Why are people shocked at Sinn Féin’s leader marching with a 100-year-old banner? 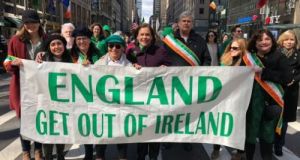 Age has not withered Fr Seán McManus, a Catholic priest and 47-year resident of the United States now in his mid-70s, an age when the brain and humour tend towards the more nuanced side of human affairs.

In a kind of speech from the dock in 1971 following his arrest (and fine of £20) for helping a stone-throwing demonstrator to escape the police, the Fermanagh-born cleric declared that sympathy was “too weak a word” to describe his support for the IRA. He was swiftly dispatched to the US the following year to serve as a priest, where he founded the Irish National Caucus to lobby Congress for peace and justice in Northern Ireland.

He last made a splash here in 2016 when he described the late Garrett FitzGerald, a former taoiseach, as a “useless Irishman” who was prepared to “abet British oppression”. His latest is a letter to this newspaper – published yesterday – stating that the Sinn Féin leader’s choice to march behind an “England Get out of Ireland” banner in the New York St Patrick’s Day parade, was a “perfectly legitimate expression of Irish-American wishes for Ireland”. After all, he says, former US president Jimmy Carter once wore a badge with the same message in the New York parade.

The New York parade was always a cauldron of misty-eyed Irish-American sentiment not necessarily shared by the folks in the old country. That old right-wing tendency has become impossible to ignore again in the Trump years, with a non-stop parade of deep-dyed Trumpites boasting Irish heritage – Conway, Ryan, King, Flynn, Kelly, Mulvaney, Pence, Bannon et al.

At the height of the Troubles, much of the IRA’s financial firepower came from the Bronx-based Noraid (the Irish Northern Aid committee) , which openly collected funds for the IRA at the New York parade. In 1983, Noraid co-founder Michael Flannery – who said publicly that the event should be considered “pro-IRA” – was named grand marshal (by the Ancient Order of Hibernians among others), four months after a jury had acquitted him and others of arms-smuggling charges.

Niall O’Dowd of Irish Central, who is a key player in the Irish-American axis of the peace process, takes a benign view of the banner, describing it as the element that defines the New York parade. It is the only political banner allowed, he notes – which will doubtless be news to many back home – and he characterises it as “a gesture of defiance that has echoed down the decades”. In which case, it seems curmudgeonly and futile to argue with a 70-year tradition and the image of a joyful Dubliner, Mary Lou McDonald, marching behind the venerable banner with the Brehon Law Society – a group dedicated to peace and justice for a united Ireland – and a cause central to Sinn Féin’s existence.

So why were many Irish people back home a bit crestfallen – to put it no more strongly than that – to be confronted by that image on our national day? Fr McManus chooses to characterise the reaction as “faux shock”. This is highly presumptuous. If he is implying that silly Irish snowflakes failed to understand the context, then perhaps some non-patronising explanation should have been provided (as opposed to the Sinn Féin picture caption, “No explanation needed”) .

Context is deeply important. It’s worth noting for example, that it is all of 40 years since Jimmy Carter wore the “England get out of Ireland” badge at the parade and that he was in full-blown presidential campaign mode at the time.

When McManus accuses people of “faux-shock”, to whom is he referring? Is it the “shock” say, of Gregory Campbell, the DUP hardliner who, as O’Dowd points out, said he would use any Irish Language Act as “toilet paper”? Is it the Tánaiste’s injunction to McDonald to “grow up”, that “we are better than this”? Is it the shock of people with English accents who have made their homes in Ireland and flinch at the in-your-face reminder of the old “Brits out” chant, still lobbed at various assemblies? Or is it the dismay of ordinary Irish people who aspire to live in calmer, more nuanced times, who watch fearfully as the hard-built masonry of the neighbourhood threatens to collapse under the weight of Brexit and border concerns and worries about further emboldening the boyos who set off a car bomb in Derry a few weeks ago?

This is not simply a Northern issue. To compare the banner, as McManus does, with how a similar message might appear to pro-UK people in the event of Scottish independence, is disingenuous. The North is not Finchley or Edinburgh, as we have seen over and over to our communal grief. McDonald is the leader of a significant political party in the Republic with the aim of persuading North and South into a united Ireland – “persuade” being the operative word.

We are not shocked, just persuaded that some messages age poorly, however benign the environment, however venerable the fabric in which they are inscribed.