Newton Emerson: Being in Nato would trump Commonwealth membership 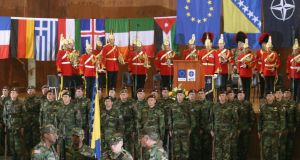 Assimilating new peoples through military service is one of the oldest tricks of statecraft. Full Nato membership, alongside UK allies, would create armed forces unionists might be interested in joining. Photograph: AP

I am told Jewish people can be wary of “semitophiles” – those who admire Jews for their history and culture. Such admiration is invariably based on stereotypes, which in their own way are prejudices, too similar to the stereotypes twisted by anti-Semites into hatred and paranoia.

Asian people in the United States suffer a comparable problem of double-edged patronisation. It is a feeling I empathise with, as a unionist, whenever people in the Republic propose Commonwealth membership. I know they mean well but I wonder if I am about to be praised for my work ethic, stoicism and home-baking skills. That would be no less cringe-inducing than the assumption I need a symbolic tether to Buckingham Palace.

The Commonwealth is, in any case, no longer a monarchical institution. Most members are republics and the organisation’s head need not be the UK’s head of state. Unionists are not demanding Irish membership or seeking it as a concession in a united Ireland – they prefer not to discuss unification at all.

DUP MP Jeffrey Donaldson mentioned the subject at last month’s Fine Gael conference, provoking the current round of debate, but he only appears to have done so while searching for something to say to a room full of well-meaning people. It would have been better if he had brought home-made caramel squares.

Commonwealth membership remains a conversation the Irish are having among themselves, in which debate inevitably turns to how much awful Britishness they can bear for the sake of northern Protestants.

All Northern Protestants get in return, given that Commonwealth membership is to all practical purposes meaningless, is the abuse of the counter-argument.

At the anti-Brexit protest on the Border last weekend, one placard calling for unification and endorsed by Sinn Féin read, “No Border. No Brexit. No Commonwealth”. No explanation necessary, it appears.

When explanations are offered they are usually based on “anti-colonialism”, the sly sectarianism that implies Northern Protestants are imposed settlers – a ludicrous concept in European terms – with the implications of “decolonisation” left hanging in the air.

The portrayal of Northern Ireland as a colonial construct tells unionists to get out more than any “England Get Out of Ireland” banner, and nothing licences this bigotry like the Commonwealth debate.

If Ireland wants to consider a significant move with unionist appeal, the international organisation it needs to join is Nato.

This is an answer staring everyone in the face, to the extent that discussing Commonwealth membership looks like displacement activity.

At Nato’s formation in 1949, Ireland declined to join due to what it considered its unresolved dispute with the UK over Northern Ireland.

It seems that what Ireland is wary of provoking is itself. It does not consider its dispute with the UK to be sufficiently resolved to be forthright with its own population about defence co-operation

When that dispute was supposedly resolved with the passing of the Belfast Agreement, Ireland signed up only to non-member Nato partnership programmes, most of whose participants are former Soviet Republics trying neither to provoke nor fall victim to Vladimir Putin’s Russia.

Officially, Ireland now spurns Nato membership due its long-standing policy of neutrality, which has a legitimate and complex history since independence.

However, this is clearly not a complete explanation. Ireland participates in UN-mandated and Nato-led military operations. In 2015, it signed what was billed as its first memorandum of defence co-operation with the UK. Yet a year later it emerged both countries already had several agreements for British defence of Irish airspace, operating under Nato systems, which had been kept secret to avoid domestic controversy.

It seems that what Ireland is wary of provoking is itself. It does not consider its dispute with the UK to be sufficiently resolved to be forthright with its own population about defence co-operation.

Consider what that looks like to the unionist population, and how powerful a message would be sent if this position changed.

One advantage would be tackling the “anti-colonialists”, who in Ireland tend to slip in and out from behind the respectable cloak of neutrality. Removing that cloak would deny their sectarianism much of its political and intellectual cover.

In terms of a united Ireland, Nato membership moves from significant to arguably essential. What lingering hint of a frozen conflict with the UK could be allowed to continue?

Assimilating new peoples through military service is one of the oldest tricks of statecraft. Full Nato membership, alongside UK allies, would create armed forces unionists might be interested in joining.

As things stand, Ireland’s defence forces can have a culture – not unexpectedly – of unapologetic Irish republicanism. That is an underappreciated liability to unification.

Even for those of us not inclined to serve, or particularly fearful of Irish soldiers on the streets, a better military position is important.

I do not want to live in a country whose only means of defending itself is to demonstrate that, if invaded, if can complain about it for the next 800 years.