The DUP's Westminster adventure is coming to an end

Newton Emerson: Northern Ireland is being nudged towards a point of no return 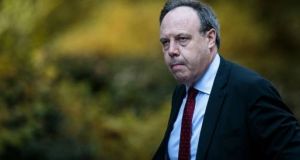 Nigel Dodds: he says he is “very, very confident” Stormont can be restored “in the short to medium term”. Photograph: Getty Images

The DUP is suffering from a reset fantasy – a belief that once a Brexit deal is done everything in Northern Ireland will go back to what passes for normal.

There is a striking illustration of this in the latest edition of Westminster’s in-house magazine, The House, in which DUP deputy leader Nigel Dodds says he is “very, very confident” Stormont can be restored “in the short to medium term”.

This interview was given last Thursday, immediately after MPs voted to extend the Brexit deadline. The legal deadline to restore Stormont is next Tuesday. There is provision for a one-off extension of Stormont talks to August, but a simultaneous Brexit extension makes that equally hopeless.

Despite just watching his fellow MPs mandate such an extension, Dodds was not in the least perturbed. Had he a plan, a hint of background moves or even just an inspirational message for the people of Northern Ireland on the restoration of their government?

No. What Dodds said was: “I don’t think the concept of powersharing is dead because everybody in Northern Ireland is brought into it, they accept it, that’s the default position. People want devolved government. They don’t want to go back to violence. So all the ingredients are there.”

In other words, Northern Ireland will click back into its Belfast Agreement tramlines once the current distraction is over.

Dodds is not alone in this complacency. Off the record other DUP leadership figures tell journalists “of course there’ll be a Brexit deal” and “everybody needs to calm down”. Their own responsibility to calm everyone down, and for winding everyone up in the first place, either never occurs to them or is considered a task for another day.

For the moment the DUP is caught up in the excitement of being at the heart of Westminster. As Dodds told The House: “I’ve been very fortunate to be involved...at this absolutely critical time with the balance of power that we hold. It’s just amazing.”

Dodds must know what it will take to get back into power at Stormont. He was part of the DUP leadership team that reached a draft agreement with Sinn Féin to restore devolution in February last year. The deal included an Irish language Act that proved anathema to the party’s members and supporters despite being otherwise extremely generous to unionists. So the DUP pulled the plug.

Since then Sinn Féin’s members and supporters have only grown angrier, in large part due to the spectacle of the DUP having an amazing time. Consequently, an Irish language Act is no longer enough to bring Sinn Féin back into Stormont.

There will also have to be deals on same-sex marriage and probably abortion. Troubles legacy mechanisms previously agreed but not enacted will have to be reagreed, having become contentious among unionist voters during the hiatus.

Beyond specific issues, the framing of Stormont as a senior-junior partnership of unionism and nationalism must be completely recast as a partnership of equals – if Sinn Féin is still up for that being within sight of becoming the largest party.

If the DUP wants Stormont to last it also will have to change its leader as Arlene Foster is clearly unsuited to the role.

The DUP has done nothing to prepare its members and supporters for any of this. Every day it delays makes the inevitable task harder.

Hostilities between itself and Sinn Féin – contrived rows over street signs and memorials, for example – are now being ramped up ahead of council elections in May. There could also be a European election that month. Traditionally, these hostilities would end with everyone trooping back to work. Without Stormont that cannot happen. Northern Ireland is being nudged towards a point of no return.

Meanwhile, the DUP’s Westminster adventure is coming to an end. Prime minister Theresa May is on the way out, along with her dogged, unimaginative focus on keeping the DUP happy.

In the Commons last week environment secretary Michael Gove – long an ally of unionism – warned the DUP a no-deal Brexit would result in direct rule with Dublin input.

The DUP obtained an assurance from deputy prime minister David Lidington this was not the case, but Lidington is May’s creature. Although Gove is most unlikely to be the next prime minister he fancies his chances, and he did not see threatening the DUP as harming those chances.

The DUP reportedly sounded out other Conservative leadership hopefuls last week over keeping Northern Ireland aligned with Britain after Brexit, and was disappointed with the response.

The British government might depend on the DUP for its Commons majority but May’s successor will not be a willing hostage.