Much of the political class is in shock, but this, in fact, can be a victory for parliament and the democratic process

British prime minister Theresa May says that she is willing to sit down with Labour leader Jeremy Corbyn in an attempt to solve the Brexit impasse and agree a deal among MPs. 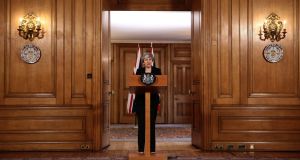 Britain’s Prime Minister Theresa May gives a statement inside 10 Downing Street in London on April 2, 2019 after chairing a day-long meeting of the cabinet. - Britain will seek a further delay to Brexit to allow more time for parliament to pass the deal agreed with the European Union. JACK TAYLOR/AFP/Getty Images

The carefully crafted illusions the May administration were founded on have crumbled into dust. After three years of civil service expertise wasted, billions of pounds of growth lost and two years’ worth of legislative time squandered, Theresa May stopped trying to get Brexit through with Tory votes and turned to Jeremy Corbyn.

Corbyn will be asked to co-author a new version of the political declaration acceptable to Labour, or failing that to help engineer a majority in the Commons, either for a Norway-style deal or a customs union.

In effect May has bottled out of a fourth “meaningful vote”, ditched the threat of no deal completely and in a desperate attempt to avoid an election has thrown herself on the mercy of parliament. It should show no mercy.

Labour’s proposed Brexit deal would sign Britain up to the customs union and enter a state of “dynamic alignment” with the rules of the single market. This is not the equivalent of a Norway-style deal, because it allows Britain to participate fully in the single market – with the obligation to accept freedom of movement – but to diverge over time by paying a price in lost market access.

If May can accept this to the letter, and is prepared to whip her MPs for it, splitting the Tory party for a generation, Corbyn should consider the offer. But I doubt she will do so. Indeed, I doubt she will retain a shred of authority once the Tory grassroots and backbenches understand the scale of the climbdown she has made.

In that case, we are in for a rapid knockout competition in parliament, the result of which will likely see either the customs union or a full Norway-style deal get a majority.

But what’s crucial now is that any deal done must be put to a second referendum, with remain as the other option.

For the past two years it has been pro-remain progressives who advocated a second referendum. Now, all possible outcomes look so far away from the fantasies sold to leave voters that they need to be given the option to decide whether remain is better.

Despite getting six million signatures on a petition, the simple revocation of article 50 would have zero democratic legitimacy. To cancel the disastrous effects of a referendum held amid lies, hubris and law-breaking we need another one, this time with more truth.

There are people on the remain side who have convinced themselves that an otherised, alien, hostile entity called the “working class” wants Brexit so badly that there will be a far-right revolt if a new referendum is called. All the deep polling shows this is nonsense. There have, as promises turned to dust, been clear swings among working-class women, Muslim voters and low-paid young people, leaving a polling majority for remain.

For certain a second referendum will be difficult. But mass ideologies deflate suddenly. There cannot legitimately be a no-deal option on the ballot paper – in which case, I expect the minority of dedicated white nationalists and xenophobes to throw the towel in. We need to break it to them as gently as possible, and offer as many as possible a way back to consensus politics, but May’s bombshell means simply: the Little English nationalist revolution is over.

On the left side of politics, I expect some of the Labour MPs (and a few frontbenchers) who’ve voted against the second referendum to conduct a rearguard action that would delink any deal agreed from a people’s vote. But this too is a non-starter, especially among Labour’s membership. Corbyn should resist any backbench attempts to resolve this crisis over the heads of the British electorate.

Much of the political class is in shock, but this, in fact, can be a victory for parliament and the democratic process. Since Chequers we’ve known that no form of Brexit that is possible is actually acceptable to the people who voted for it. That’s their problem to own.

Let’s find out now what there is a majority for, and test it at the ballot box against the most obvious solution: to remain in the EU, preferably with a Corbyn-led government, drawing in the progressive nationalists and Greens.

The Tory party’s moral collapse is under way. I don’t know what new formation will emerge. But even its enemies must acknowledge that Corbyn’s Labour party has ground May’s project to dust by drawing on the one thing that outsiders to the labour movement can never quite understand: the discipline and solidarity that come from being vilified and ignored – something May could never rely on among the squabbling ranks of entitled Tory MPs.