John O’Brennan: Bosnian-type deal not a solution for Syria

While the Balkans war was regional, the Syrian civil war may lead to global conflict 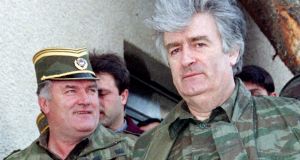 As the civil war in Syria moves towards a fifth year there have been calls for a Bosnian-style peace accord that would bring all players to the table, end the fighting and help reconstitute the Syrian state.

This argument undoubtedly holds superficial attraction. The Dayton Accords were signed 20 years ago this week after a bloody war in Bosnia from 1992- 1995 that cost 100,000 lives and displaced as many as two million people, most of whom have not returned. The war also gave rise to the entry into the political lexicon of that most sinister of terms, “ethnic cleansing”, coined by Bosnian Serb leader Radovan Karadzic.

The Syrian civil war has claimed about 250,000 lives and displaced up to eight million people. Brutality and terror against the civilian population are the hallmarks of an increasingly intractable conflict, as in Bosnia.

Both wars, it is sometimes argued, emerged out of the “ancient hatreds” of mutually antagonistic ethnic and confessional groups. In Bosnia it was the Orthodox Serbs against the Croatian Catholics and “Bosniaks” (Bosnian Muslims). In Syria it is the Shia Alawites and Christian versus the Sunni Muslims.

These conflicts are all the more vicious, it is alleged, as the differences between the groups are so deeply rooted in patterns of historical struggle. If one group has hated another for hundreds of years and the shared history is one of recurring and endemic conflict, then these problems are much less mutable to conventional mediation. Or so the argument goes.

The problem with the “ancient hatreds” argument is that it is entirely bogus. In Bosnia, the historical experience certainly includes episodes of inter-communal bloodshed, but it also includes long periods of benign co-existencec.

Far from being perennially war-torn, the Balkans, as UCD professor Sinisa Maleševic has shown, has recorded fewer wars than almost any other comparable region of Europe. Similarly, Syria demonstrates a complex history where otherwise discrete confessional or ethno-national units were as likely (until recently) to interact peaceably as clash violently.

Britain and France did everything possible to prevent direct western engagement in Bosnia, while post-Soviet Russia was still finding its feet. This meant it was relatively easy for Richard Holbrooke, the Clinton administration’s key interlocutor with the Serb, Croat and Bosniak delegations, to forge an agreement.

In Syria, by contrast, powerful external actors such as Iran and Russia have weighed in on the side of the Assad regime whilst the US, France, Turkey, and the UK are all engaged to different degrees in the assault on Islamic State. Whereas the conflict in Bosnia never threatened to become anything more than a regional conflagration, the Syrian theatre of operations now pits Russia and its allies against the US and its coalition partners.

The shooting down of a Russian aircraft by Turkish forces showed the extent to which these localised contacts between opposed outside actors threaten to spill over into a global confrontationof great powers. Thus there is a much more complex topography of interests and power and significantly more at stake in a potential Syrian endgame than was the case in Bosnia.

We should also recognise another essential difference between the two conflicts. Whereas in Bosnia Islam evolved as a moderate worldview easily reconcilable with secular politics, in Syria the dominant groups opposing the Assad regime all adhere to a fundamentalist conception of Islam. Islamic State, also known as Isis, may be vigorously opposed by Jabhat al-Nusra but both evolved out of the “Fighting Vanguards” movement, itself an offshoot of the Syrian branch of the Muslim Brotherhood.

The war they are fighting against the Assad regime is a war on Baathism, inter-communalism and secularism (accompanied now by a millennial conflict against western “Crusader” nations). This is a collective worldview which sits very uneasily with pluralist party politics, minority rights and refugee return. Such apocalyptic visions of social life do not normally lend themselves to compromise and negotiation of the Dayton kind.

A common misconception about the Syrian civil war is that these fundamentalist Salafist groups emerged during the current conflict and as a spillover from Iraq. But, as Sami Moubayed writes in Under the Black Flag: At the Frontier of the New Jihad, the history of fundamentalist challenges to the Assad regime goes back at least to the late 1970s.

Dayton may have pulled apart Bosnia’s warring parties but it did not deliver the glue to put the pieces of the country back together. The deal essentially rewarded ethnic cleansing and cemented divisions. Twenty years on Bosnia’s political landscape remains dominated by old enmities; the ethnic divisions seem more entrenched than ever and the state remains far from consolidated. Indeed, the most powerful argument to be made against using Dayton as a model for peacebuilding in Syria is that it simply has not worked.