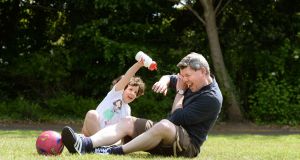 By the time you read this, my wife and I will be in Aruba. The weather will be warm but not hot, the drinks will be cold but not freezing, the servers attentive but not cloying.

Everything will be just so. Mere thought is all it will take for any demand we dream up to be met. A massage? Live sport? A new Eastenders? Poof! Ours, in an instant.

Everything in the above paragraph is 100 per cent true, save for a couple of small details. Travel restrictions and so on will mean that the local park might have to stand in as a metaphorical Aruba. Actually, maybe just the living room will do the trick. Maybe we’ll just sit in the car.

As for the weather, we’ll honestly be grand with whatever Joanna Donnelly sends. Sun, rain, snow, even the usual Irish summer mugg. We’re good, whatever you’ve got. And look, truth be told, we have no actual demands. We’ll take a massage if you have a massage. Sport, EastEnders, whatever’s going. But if you have none of them, don’t give it a second thought. We’re fine. We’re happy. Nothing can kill our mood. Not now that the creche is open.

The 111, by the by, refers to the number of days the creche was closed. On March 12th, we got the message saying the Government had decreed they had to close the creche. I just dug it out of the WhatsApp there a minute ago and literally laughed out loud at the sentence that said: “We will not be able to open again until the 30th of March 2020.” The idea that there was a time when we half-thought we might get out the far side of this in a matter of weeks seems so ridiculous now.

That’s 111 days when our five-year-old daughter was never not in the company of one or other of us. Take out time spent asleep and it’s been somewhere in the region of 1,600 hours of crafts and colouring and reading and gardening and football and climbing trees and movies and cooking and hurling and more colouring and baking and lighthouse building and circus tricks and papier maché and singing and car-washing and little cakes and Teach Your Monster To Read and Kittens Can Count and biking and spring cleaning and more movies and Home School Hub and marble runs and practising letters and the most chilling sentence in the English language: “What are we doing now?”

Our lockdown could have been worse. We know this. We’ve only one child to worry about and she’s at a reasonably manageable age. She hasn’t started school yet so we didn’t have to crack the whip for her to hit the books at any point. She’s at the stage where she’s finding all that kind of thing fascinating anyway.

I just want to play with them and not you!!

And, in general, she has handled it all pretty well. The tantrums have been relatively few, in fairness to her. She lasted a good six weeks of not being able to play with her friends – the next-door neighbours – with relatively little fuss. So much so that when she lost it one evening when they were out on the green and we couldn’t join in with them, it was nearly a surprise.

Gobshite Daddy, upon asking what was the matter, got a fully deserved screamed reply: “I just want to play with them and not you!!” Which is only a credit to her, I feel. I wouldn’t want to play with me either (no sniggering down the back, please).

But enough has very much become enough as time has passed. Working from home, parenting from work, call it whatever you like, it’s not sustainable. Kids know when you are giving them only half your attention.

The first thing I do every morning is read the papers on the phone, to get up to speed with whatever’s going on. In my head, I justify it as something I can be doing workwise while we’re having breakfast together. But having breakfast at the same time at the same table isn’t the same as having it together. She’ll ask me something and I’ll only be half-listening and she’ll sense this and get annoyed and I’ll get annoyed that she’s annoyed and just like that, the day has got off on the wrong foot.

That wasn’t every day, not by a long chalk. But it was some days. And other days had other flashpoints, all of them directly linked to the time slot Rubik’s Cube that is working with no childcare. The opening of the creche, even just for the seven weeks before she starts school, is nothing short of life-changing.

Aruba baby! Think I might see if Lidl has any hammocks going.