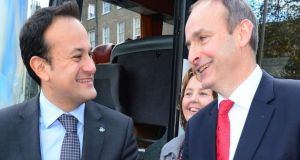 Germany’s grand coalition government is getting more Irish by the day.

When it emerged in 2005, the Berlin coalition’s “grand” label meant great, sizeable, powerful. Some 15 years later, in its third and most tired iteration to date, Berlin’s government has taken on the Irish definition of grand: okay, fine, not really.

And, for all the differences in the Irish and German political systems, the rise and fall of grand coalition politics in Germany are a timely warning should Fianna Fáil and Fine Gael consider forming an alliance against Sinn Féin. What began in Berlin with the best of intentions has ended in desperate denial that the world is changing and that political parties must adapt accordingly or die.

First the numbers. In 2005, Angela Merkel’s centre-right Christian Democratic Union (CDU) and its Bavarian allies, the Christian Social Union (CSU), pooled their 226 seats with the SPD’s 222 for the first Merkel grand coalition.

The government held 73 per cent of Bundestag seats and could provide timely stability and political heft when the financial and banking crisis hit. Similarly, Dr Merkel’s second grand coalition took office in 2013 in the middle of the euro crisis, with 71 per cent control of parliament.

After the most recent election in September 2017, however, it took six months and two attempts for Dr Merkel to secure her fourth term and a second-choice, third alliance with the SPD.

Despite an election system that favours the two larger parties, this “grand” coalition now holds just 56 per cent of all Bundestag seats – down 18 points in 15 years.

The centre-left Social Democratic Party (SPD) has had anything but a grand time in power with Angela Merkel, given her talent for taking credit for their policy successes. The SPD is also still haunted by whether its 2003 reform programme saved Germany while selling out voters of Germany’s oldest party. A permanent slide to historic lows of 12 per cent support in polls has only aggravated the SPD identity crisis.

But something interesting happened on February 5th last. The CDU joined the SPD in the identity crisis clinic after what should have been an unremarkable vote in a small eastern German state parliament exposed the CDU’s own weakness.

The local CDU were so determined to prevent a second term in Thuringia for a Left Party leader that its MPs risked backing a candidate who had support of the far-right Alternative für Deutschland (AfD).

The resulting crisis has triggered resignations of the CDU leader in Thuringia and in Berlin. Senior CDU officials, fearing months of debate in the search for another successor to Angela Merkel, insist policy discussion should now have primacy over personalities.

But so unused is the party to real policy debate that anyone who has ideas – how to respond to voter anger or new political realities – is shouted down.

One CDU taboo lies in tatters – co-operating with the far-right – while other taboos remain intact. Above all: a hard, fast refusal to even consider diverging from the centrist Merkel CDU path, not even to broaden its political offering to the right.

Last week Wolfgang Schäuble, Bundestag president and a long-serving CDU figure, attributed his party’s crisis in part to grand coalition politics but also to its risk-averse style of its leader.

In a dig at Dr Merkel he bemoaned a political culture that avoided “dispute, alternatives and decisions (and) for that you need leadership and charisma”.

Part of Dr Merkel’s political legacy – a CDU pivot to the centre – brought huge political wins and three election wins. But this hinged on the assumption that traditional CDU conservative voters had nowhere else to go.

The arrival of the Alternative für Deutschland, buoyed first by the euro crisis and then the refugee influx, changed all that. Even now, as it radicalises into an anti-immigrant, xenophobic party with a growing fascist wing, the AfD is still home to a sizeable number of disillusioned ex-CDU voters.

And the CDU, still vibrating with outrage after the Thuringian vote, has no clear line on what to do now. Would reaching out with a political offering to its conservative ex-voters, now in the AfD, amount to beating or joining the far-right?

The growing identity crises of Germany’s grand coalition parties have diverted energy from answers to the major tensions of the early 21st century: migration, climate change, digitalisation, or the post-Brexit EU.

Germany’s once dominant parties have slipped from 69 per cent support in the 2005 election to just 42 per cent in polls today.

Meanwhile the Greens are enjoying record support of 22 per cent while the political fringes, left and right, have 23 per cent combined.

With talk of an Irish grand coalition in its early days, the recent election results might well see two chastened political parties deliver on voters’ mandate for change. Or it might encourage them to follow the German model, where two former political giants cling to each other in denial at the end of their power duopoly.

One lesson from Berlin is worth heeding: by failing to agree a one-term grand coalition limit Germany’s ruling parties are, 15 years on, trapped in a political prison of their own making. Peering through the bars, they see a world outside of angry voters, fading options and radical rivals. As Yeats warned a century ago, the best lack all conviction, while the worst are full of passionate intensity.