Classical echoes – An Irishman’s Diary on Padraic Colum and Homer 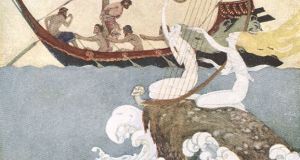 A nice book by an Irish author was published in London a century ago this June. It was a new version of two stories that have been told not just for centuries but for millennia. It was Padraic Colum’s The Adventures of Odysseus and The Tale of Troy by Homer.

The story of Odysseus, who wandered for 10 years trying to get home to his wife and son in Ithaca after the Trojan War, contains all of the elements of soap-opera or Hollywood drama. The epic poem is still enjoyed because it rings true of human nature.

Colum had a way of retelling old tales. The American Library Association deemed three of his titles between 1922 and 1934 “Newbery Honor Books”.

The Hawaiian legislature even invited him to make over native traditions into volumes for young readers, entitled Legends of Hawaii. In 2011 then-taoiseach Enda Kenny presented one of these to Hawaiian-born US president Barack Obama on his visit to Ireland, for Obama’s two daughters.

Before leaving Ireland in 1914, Colum himself was known as a poet and playwright. Born in 1881, the son of a master of the Longford workhouse, he later attended national school in Glasthule, Co Dublin. He received no further formal education.

Colum said, “I wrote my first poems for Arthur Griffith’s and A.E.’s journals and was immediately welcomed by people who took trouble to show a young writer how to form himself.”

His poems for Griffith’s United Irishman paper later appeared in 1907 in Colum’s successful collection Wild Earth. He features in James Joyce’s Ulysses, itself inspired by Homer’s Odyssey. One character says, “I liked Colum’s Drover. Yes, I think he has that queer thing genius”.

Colum’s plays The Land and Thomas Muskerry were performed at the Abbey Theatre. But he left for New York with his new wife Mary, as the first World War began.

His first literary break in America was the writing of stories for children, printed in the Sunday edition of a newspaper. He drew on Irish folk traditions for these. They became his first book for children, The King of Ireland’s Son. The Macmillan Company then paid him to take on The Odyssey and The Iliad together, and that volume first appeared in New York in 1918.

Colum, who had “the look of a startled fawn” according to Joseph Holloway, did not talk down to children. The standard of his Adventures of Odysseus is such that, in 1920, George G Harrap republished the book in London both with and without its tag “The Children’s Homer”. It was illustrated by the Hungarian artist Willy Pogany. Pogany’s work for Colum’s King of Ireland’s Son has been described as “beautiful and bizarre”. That for Colum’s tales of Homer is classical.

The Harrap edition of Colum’s Odysseus had eight colour plates including The Sirens, and many line drawings. The quality of its design is a compliment to its author. New editions of it are still appearing.

Meanwhile in 1920, in Paris, James Joyce was working to complete his own Ulysses (the Latin form of the Greek name Odysseus). Colum and his wife had known Joyce in Dublin, and Padraic later helped Joyce in Paris to prepare parts of Finnegans Wake. He wrote prefaces for some editions of Joyce’s work.

Colum’s wife Mary too was an intellectual. She wrote for leading New York papers. In 1958 the pair’s book Our Friend James Joyce was published. Like Griffith, whose wife was also christened Mary, Colum called his spouse “Molly”. Did this influence Joyce’s choice of that name for Leopold Bloom’s wife in Ulysses?

When Griffith died suddenly in 1922, Padraic Colum heard the sad news on board an Atlantic liner bound for Ireland. It inspired him to pen a poetic tribute casting Griffith as an Irish Odysseus. Colum’s “Odysseus: In Memory of Arthur Griffith” is best read in its full version.

Colum was later persuaded to write an account of Griffith and the origins of the Irish Free State that sold well in America and Ireland. Sympathetic to the statesman who first published some of Colum’s drama, prose and poetry, it is an engaging volume that mostly stands the test of time.

Inspired by Homer, Colum also tried his hand at an Irish heroic epic. This was set at the turn of the Bronze Age, and dedicated to Michael Collins. But it was not a critical success.

Colum was a prolific writer who lived until he was ninety. In his poem about the blind poet Raftery, he compared fame to dance music played on a wind-swept road when people have gone home. As his fame fades, his version of Homer is an echo of his genius.

1 Drug dealer loses codes for €53.6m bitcoin accounts
2 The close links between Sinn Féin and IRA untangled
3 ‘How can we torment a bunch of millennial snowflakes and get away with it?’
4 A Dad with brain cancer: I was given 18 months to live, it put things into perspective
5 Leo Varadkar and Micheál Martin agree to exploratory talks
Real news has value SUBSCRIBE