Most redundancies are in manufacturing, wholesale, retail and transportation sectors 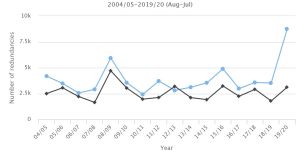 More than 8,750 redundancies were proposed in the North in the year until the end of July

More than 6,000 proposed redundancies have been recorded in Northern Ireland since the beginning of March, according to figures released on Tuesday by the Northern Ireland Statistics and Research Agency (NISRA).

Vacancy data also showed a “sizeable fall in demand for labour”, NISRA noted, with April showing the lowest number of vacancy postings since records began in 2014, while the average number of hours worked fell to the lowest on record between April and June.

The data contained in NISRA’s Labour Market Report, which is released monthly, shows the impact of the coronavirus pandemic on the North’s economy.

It is required by law that the Department for the Economy is notified of a proposal to make redundant 20 or more employees.

According to NISRA, the number of proposed redundancies reached almost 2,000 in July, following almost 2,500 in June. A further 163 were proposed between August 1st and August 10th.

However, true figures are likely to be higher, as companies are not required to notify the Department for the Economy of redundancies of fewer than 20 employees.

The redundancies were mainly in the manufacturing, wholesale, retail and transportation sectors.

More than 8,750 redundancies were proposed in the year until the end of July, more than double the number recorded in the previous 12 months and the highest on record.

A total of 610 redundancies took place last month. There is a difference between the number of proposed and confirmed reduncancies because of the notice period employers must give staff.

The number of vacancies notified to the Department of Communities from April to June fell to 7,900, less than half the previous quarter.

The number of people claiming unemployment benefit rose by 500, with NISRA noting it was the third consecutive month the claimant count was above 60,000. These were “levels previously seen in 2012 and 2013,” it said.

“The headline employment rate decreased over the quarter and the year, but at 71.7 per cent remains relatively high and above rates in 2018,” NISRA found.

“However, within those included in the employed total, 21 per cent were temporarily away from work and 40 per cent were working fewer than their usual hours.