Inside an album: Picture postcards were the text messages of their day

An Irishman’s Diary: Collection from circa 1903 offers window into slower, innocent time 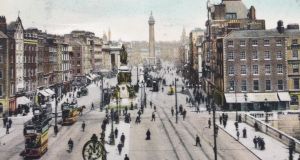 A surprise discovery in the attic of an old picture postcard album, barely held together by a battered cover and elastic bands, turned out to be a revelation. And by old we’re talking circa 1903. The cards were in technicolour, black and white, and sepia. For cards well over a hundred years old they were in surprisingly good condition. The album was given to this writer some years ago by a friend whose mother rescued it some 80 years earlier and who incidentally hopes to celebrate her 100th birthday shortly.

Some amateur research indicates the original compiler of the album was a Miss Jennie Lynch from Fairview Terrace, Mullingar, aided and abetted by her (presumably) sisters, Madge, Dolly and Elsie. Somebody, somewhere must also have been a philatelist , as the stamps are missing from most of the cards and in some instances the entire top corner has been torn off. They cost a ha’penny (half a penny) to post, though some placed a 1d (an old penny or pingin) stamp on them. Delivery apparently was always made on the following day and in certain circumstances on the same day.

There are well over a hundred postcards in the album, depicting shots from almost every county in Ireland and they are a joy to behold. A photo of Salthill in Galway shows an almost empty street with only a horse-drawn carriage (possibly a tram) in the distance. Sackville Street (now O’Connell Street) has lots of pedestrians, perhaps walking in the snow, and three trams. There’s a shot of “an isolation hospital” though it doesn’t (perhaps understandably) say where. There’s also an old-world photo of the old bridge in Waterford showing a large sailing ship moored close by. And a glorious coloured card of the “Royal Procession passing Conarchy’s Hotel, Rutland Square, Dublin, 1911”. Yet another card depicts the “Official Residence of the Lord Lieutenant seen from Phoenix Park”. Shots of Kerry and Donegal abound. There is not a sign of a car in any photograph.

Of special interest apparently was the “Irish International Exhibition, Dublin, 1907” as there are at least a dozen different cards of the RDS. One depicts a long water chute, another a “baby incubator institute”. It’s delightful to see the ladies out strolling, invariably in pairs, in full-length dresses, all under their parasols.

If the picture side of the cards are interesting the reverse sides are utterly fascinating. Almost all the messages are handwritten in blue ink, most with copperplate handwriting, and most messages are brief, some to the point of curtness. “Meet me off the 10.15 in the morning”. Others somewhat sadder: “Michael has pneumonia, going to the doctors at eleven tomorrow”.

Some of the English used is of another time: “please excuse me for not replying ere this”. And then there’s the mysterious card from far away: “Do not write until you hear from me again”, signed Michael with a post mark, Mombasa, Brit East Africa. WL wrote “If you can, come up on Sat. on the 12-10 I’ll have the kettle on”. There’s little doubt these cards were the text messages of their day.

Nor was romance overlooked. One anonymous love-struck gentleman penned his affections with, “From one of your admirers. Yours to a cinder”. Another with “Thy fidelity deserves admiration”, signed EGL. Another suitor stated “There let us sit near beds of roses/ with you all is fragrant posies”. And how about CJ who signed himself off “with all due apologies I remain yours, until found by the dustman”. But pride of place must surely go to the unsigned author who bared his heart and soul with “Love’s golden dream is passed/hidden by mists of pain/but we shall meet at last/never to part again”.

Included in the collection are some naughty, seaside cartoon postcards, posted mainly from English seaside resorts, all with double entendres. Suggestive enough at the time to make the postman blush. No doubt risque at the time but today they seem mildly amusing. They might give my grandchildren a giggle or two – the exaggerated drawings more than the jokes.

Notwithstanding these cards were written around my grandmother’s time (and this writer is no spring chicken) it is sobering to see how much the world has changed and to see how little we have changed. Either way this collection should be finally laid to rest in a museum. They’re of another time and on the evidence of these postcards of a long-gone, slower, innocent time.