Could Hong Kong go the way of Belfast?

As in Northern Ireland, government intransigence and police over-reaction have transformed a peaceful protest campaign into a movement demanding sweeping change 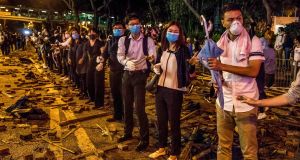 Protesters form a human chain to pass items to the frontline during clashes with police as they attempt to march towards Hong Kong Polytechnic University in Hung Hom district of Hong Kong on Monday. Photograph: Dale De La Rey/AFP via Getty Images

The crowds surged through the streets, demanding basic political rights. They were met by club-wielding riot police firing teargas and rubber bullets. The clashes became routine, reflecting the gap between an aroused populace and an isolated and unresponsive government.

This sounds very much like Hong Kong, where I live, in the summer and autumn of 2019, but in fact describes Northern Ireland 50 years ago. As the crisis in Hong Kong shows no sign of resolution, the strife increasingly resembles the Troubles I covered as a journalist in the 1970s and 1980s.

The Troubles began as a peaceful protest movement. Hong Kong’s 2019 protests also began peacefully. The immediate issue was a law proposed by Beijing-appointed chief executive Carrie Lam to allow the extradition of people from Hong Kong to mainland China, where the Chinese Communist Party controls the legal system.

As a journalist in Belfast wrote in 1971, teargas had “enormous power to wield a crowd together in common sympathy and common hatred for the men who gassed them”. In Hong Kong’s densely populated neighbourhoods, teargas has had a similar effect, fuelling intense resentment

But deeper anxieties fuelled concern – a staggeringly unequal economy benefitting the wealthy while leaving many young people behind and political decision-making dominated by an alliance between Beijing and the city’s out-of-touch tycoons. It was a far cry from the right to eventually elect both the chief executive and legislative council through universal suffrage that China promised Hong Kong following the end of 150 years of British colonial rule in 1997. In recent years, newly elected youthful lawmakers have articulated these concerns, and the sense of alienation has been exacerbated as the government expelled them from the legislature on such petty procedural grounds that the move seemed transparently political.

Despite warnings from lawyers, business groups and ordinary citizens that the extradition law would jeopardise Hong Kong’s independent judiciary – a key feature distinguishing it from the mainland – Lam insisted it would be passed. This led to huge demonstrations and clashes between protesters and police.

In Northern Ireland, the government’s unwillingness to address demands for basic civil rights also sparked clashes, with police using rubber bullets and teargas in largely futile efforts at crowd control. As a journalist in Belfast wrote in 1971, teargas had “enormous power to wield a crowd together in common sympathy and common hatred for the men who gassed them”.

In Hong Kong’s densely populated neighbourhoods, teargas has had a similar effect, fuelling intense resentment. By some accounts, nearly 80 per cent of the territory’s seven million people have at some point been exposed to tear gas in the past five months. At the same time, just as civilians in Belfast were blinded by rubber bullets, the use of such weapons in Hong Kong, including the case of a young woman and an Indonesian journalist both hit in the eye, added to public fury.

By the time the Northern Ireland authorities grudgingly conceded some of the basic civil rights demands in the early 1970s – an end to gerrymandered electoral districts, equal opportunity in housing and jobs – it was too late. Growing numbers of Catholics came to see the Northern Ireland state itself as illegitimate. Demands for specific reforms gave way to calls to overthrow the system altogether.

In Hong Kong, the original demand for the withdrawal of the extradition bill was grudgingly met in early September. The move was too little, too late. Police actions as well as pro-Beijing thugs who attacked demonstrators and civilians, along with the government’s unyielding arrogance, produced four other demands: creation of an independent commission to investigate police behaviour, overturning the designation of arrested protesters as rioters, Lam’s resignation, and genuine democratic reforms. Unless all demands are met, the protesters vow to continue.

As in Northern Ireland, government intransigence and police over-reaction have transformed a peaceful protest campaign into a movement demanding sweeping change. While stopping short of calls for Hong Kong independence, the protests have so alarmed Beijing that it has denounced the movement as a “colour revolution” intended to break Hong Kong’s links with China.

With the authorities ruling out further concessions and adopting emergency measures such as banning the wearing of face masks – a decision reversed on November 18th by Hong Kong’s highest court – the level of violence has increased dramatically. In the past week, radical protesters have fought pitched battles with police on the campuses of several universities, barricading roads and using Molotov cocktails, bows and arrows and even a makeshift catapult to counter tear gas, water cannon and rubber bullets.

In Northern Ireland, the failure of peaceful protest and police heavy-handedness sparked the IRA’s campaign of violence. Hong Kong has thankfully not yet reached the stage of car bombs and assassinations.

Still, for me, events in Hong Kong, with roads closed, transport disrupted, teargas in the air, and campuses, commercial, tourist and residential areas beginning to resemble war zones, bring back memories of the challenges of navigating daily life in Belfast in the 1970s.

And it could get worse. As was true with the rise of the IRA, frustration and anger among radical activists and the general public is growing, heightened by the continuing heavy-handed tactics of the police and what Amnesty International has described as “torture and ill-treatment” of those arrested. One recent Amnesty report documented cases of Hong Kong police beating detainees, threatening to apply electric shocks to their genitals and shining laser beams into their eyes.

Meanwhile, with no sign the Hong Kong authorities or their masters in Beijing are prepared to make any concessions, or indeed even to consider engaging in dialogue, the talk among radical protestors is increasingly of the need to fight back. Even before the latest sharp escalation of violence, an improvised explosive device was detonated near a police station, a protestor stabbed a police officer in the neck, and students occupying university campuses in recent days produced a large arsenal of gasoline bombs and other makeshift weapons.

It may be only a matter of time before a radical minority concludes that they have little choice but to adopt even more violent tactics. The line between deciding to make a petrol bomb or a crude explosive device that could cause much greater damage is a thin one.

It is not unreasonable to worry that the uncompromising approach of the Beijing and Hong Kong governments, exemplified by the increasingly tough behaviour of the Hong Kong police, is pushing some of the youthful protesters here in that direction.

Mike Chinoy was CNN’s first Beijing bureau chief and as senior Asia correspondent. He covered the Troubles in Northern Ireland in the 1970s and 1980s. This is an edited version of a piece that first appeared in YaleGlobal, the MacMillan Centre at Yale University. He is the author of Are You With Me? Kevin Boyle and the Rise of the Human Rights Movement which will be published in March 2020.