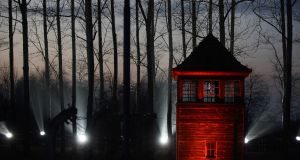 That is the thought in my head as I sit on an early-morning train that trundles back to Krakow from Oswiecim – known to the world for the Nazi-built camp on its outskirts bearing the Germanised name Auschwitz.

An estimated 1.3 million people – mostly European Jews – didn’t live to see the liberation of January 27th, 1945. They were gassed and incinerated on arrival in rail cattle wagons.

The train compartment in which I leave Oswiecim/Auschwitz is warm and has been refitted recently with red velour seats. Closing my eyes, though, I can hear the real age of the train and the uneven tracks beneath. Together they make sounds that lost their innocence here long ago: clunking, shunting, shoving, rattling.

Opening my eyes again I watch the dense forest of skinny birch trees and white frozen undergrowth outside. The Auschwitz arrivals saw a similar sight through the slits of the cattle car walls. I look around the carriage and imagine the seats disappear, the windows vanish, the temperature drops, the crush, the sweat, the prayers, the faeces, the fear.

What did I take from Auschwitz on my third visit, I think to myself? Above all the wise, empathetic words of Polish survivor Marian Turski. The death camps’ legacy was an 11th commandment, he said: do not be indifferent to human suffering, anywhere, anytime. Otherwise it will suddenly be too late.

Then Hitler was elected, the fascist trap snapped shut, and the laughter froze in Werner’s throat

In it Werner, born in Leipzig in 1896, draws on his own experiences as journalist in 1930s Berlin.

His job allowed him observe Hitler at close quarters while, back in the office, he joked and wagered with colleagues over how soon the opposition Nazi leader would embarrass himself onto the scrapheap of history.

But then Hitler was elected, the fascist trap snapped shut, and the laughter froze in Werner’s throat.

In dread-filled detail “Die Galeere” retreads what is like to wake up and realise the mutiny is over. The few are in control on deck, some are condemned to walk the plank while many others are condemned below deck where, unable to determine the direction of the slave ship, they row instead to their doom.

Werner was non-religious but his Jewish mother was enough for the Nazis. When he came on their radar he left behind his wife and two daughters to disappear underground. He survived the war on his wits, the kindness of strangers and false identity papers.

On the train back from Auschwitz, I wonder if we journalists today are any more far-sighted than Bruno E Werner and his 1930s colleagues. Are we alarmed by or growing accustomed to the rise in populism, anti-Semitism and ultra-nationalism in Europe and around the world?

We are less eager to recall the many ordinary, desperate people whom Ireland refused entry, or even deported from Ireland back to Nazi Germany

Will we see in time, or only in hindsight, the moment to sound the alarm and push back?

As the train trundles on, I think of countries’ national blindspots, like the two sides of Ireland's wartime record. We are quick to accept praise for our generosity: taking in German children and feeding many others after the war. We are quick to remember, too, the celebrity refugees we took in – think of mathematician Erwin Schrödinger.

But we are less eager to recall the many ordinary, desperate people whom Ireland refused entry, or even deported from Ireland back to Nazi Germany. And let’s not forget the Irish officials like Leo McCauley, who wrote in 1933 that Jewish refugees had “to some extent . . . brought the trouble [on] themselves”.

Today we salute the Irish Naval Service’s work fishing desperate asylum seekers out of Mediterranean but, once they’re dried out, are slower to accept them in any comparable numbers to many European neighbours.

How will future generations judge our refugee record, I wonder, and our repurposing of Catholic limbo as direct provision? Just and fair, or institutionalised indifference?

What are we throwing away today, with each lost Libyan girl or drowned Syrian boy?

As the birch forest thins out, and the train fills, I wonder if Ireland would have taken in Bruno Werner and offered him and his family a new home? Perhaps, but probably not.

Ironically, four years after the war ended Ireland was happy to take in Werner’s daughter after she married Ian Stuart, grandson of Maud Gonne.

Seventy years later Imogen Stuart, née Werner, is one of our most celebrated sculptors. On January 21st, her seminal sculpture Pangur Bán was given a new, worthy home in Áras an Uachtaráin.

But there’s one last thing I learned this time in Auschwitz. How over one million children around Imogen’s age or younger perished in the Holocaust.

As we pull into Krakow, I wonder what talents, potential, inventions, music, books and sculptures were lost with those children? And what are we throwing away today, with each lost Libyan girl or drowned Syrian boy? Auschwitz shames us, indifference dehumanises us, inaction impoverishes us – then as now.