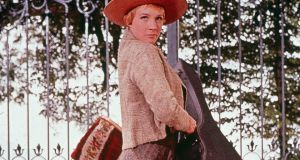 “Getting back to ‘So’, and my speculation about whether Seamus Heaney or Mark Zuckerberg was to blame for the phenomenon, perhaps I should also have included Julie Andrews on the list of suspects.” Photograph: 20th Century Fox/Getty Images

Following my lament (Diary, Thursday) about interviewees starting all their sentences with “So”, a number of readers have made heartfelt pleas that I should campaign against another linguistic scourge of our times, “In terms of”. Alas, I fear that may be even more futile.

I agree with the great lexicographer HW Fowler that compound prepositions in general are bad news. He thought them “almost the worst element in modern English, stuffing up what is written with a compost of nouny abstractions”. Unable to think of anything as good as that to call them, I just cross the street if I see one coming. As often as not, however, there’ll be one on that side too.

As for “in terms of”, a reader likens its current ubiquity to the “pandemic”. But long before Covid-19, in 2002, the US legal writing expert Joseph Kimble was already calling it a “plague”. And nearly 20 years before him, English philosopher Michael Dummett described ITO’s overuse as “the lowest point so far in the present degradation of the English language”. That was 1985.

One of the examples quoted by Dummett (a slightly unfortunate surname, by the way) was a politician saying: “We have made great progress in terms of the balance of payments”. This could be easily rewritten, he explained, as “The balance of payments has improved.” Another example was “Our troops have been highly successful in terms of advancing into enemy territory”. Dummett translated this as “Our troops have advanced deep into enemy territory”, without loss of meaning.

But from Dummett down – see what I mean about the surname? – guardians of the language have been powerless to stop ITO’s progress. Now its troops have advanced deep into the territories formerly held by good English. These include Dublin, where they have infiltrated politics at the highest level. In terms of time frame, I don’t foresee them leaving soon.

Getting back to “So”, and my speculation about whether Seamus Heaney or Mark Zuckerberg was to blame for the phenomenon, perhaps I should also have included Julie Andrews on the list of suspects. At any rate, I suspect that part of So’s popularity relates to its musical associations, as one of the notes on the do-re-mi scale we all learned at school and that Maria so imaginatively dramatised for the Von Trapp children in The Sound of Music.

Even though the interviewees who use “So” at the start of every sentence are rarely singing at the time, they may be subconsciously reassured by the sound’s resonance. It’s like a vocal tuning fork, setting the tone for the rest of their answer. Defending his choice of “So” as the translation of the first word in Beowulf, interestingly, Seamus Heaney spoke of establishing the right “note”.

Memorable as the song is, Maria’s technique of personalising the abstract note names (“Doe, a deer, a female deer/Ray, a drop of golden sun”) famously ran into trouble after, “Sew, a needle pulling thread”. The composers couldn’t think of anything to illustrate “La”, except “a note to follow Sew”. Which was a bit lame.

But while we’re at it, their claim that “Fa” is a “long, long way to run” was controversial too. “Fa” is only a long way to run if you live in the southeast of England, South Africa, Australia, New Zealand, or maybe Boston. The rest of the Anglophone world, including Ireland, Scotland, and most of the US and Canada, uses “rhotic” speech, meaning we roll our Rs. To us, therefore, Maria’s conflation of “Fa” and “Far” is just more flat-R imperialism.

Between that and the “La” problem, “Sew” is a much-needed steadying influence in the troubled middle section of the Do-Re-Mi song. This only underlines my point about the sound’s general popularity.

A careful reader has chided my use of the phrase “could hardly have drank” in yesterday’s diary. The past perfect of drink is “drank”, he agrees. “But is the past participle not ‘drunk’?” Yes, reader, you’re quite right. The past participle is indeed drunk, and so must I have been when suggesting otherwise. But in mitigation, Fowler’s dictionary accepts there has been “a great deal of fluctuation” historically and that “considerable variation is still found in British and American dialects”.

Merriam-Webster notes that past users of “have drank” include Benjamin Franklin, Jane Austen, and Mark Twain. It also speculates that the substitution of drank for drunk “originated as a way to avoid the association of drunk with intoxication”. This may explain Jane Austen writing in a letter: “It is evening; we have drank tea.” But since my sentence involved Myles na gCopaleen in a pub with two hangmen, no such delicacy was required.