In search of the banshee and the elusive lennanshee

An Irishman’s Diary: ‘Leanhaun Shee’ is the Gaelic muse, giving inspiration to those she persecutes 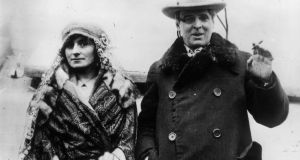 Georgie Hyde-Lees with her husband William Butler Yeats. She became the most influential of his muses. He described the leanhaun shee as the Gaelic muse, giving inspiration to those she persecutes. Photograph: Keystone/Getty Images

Everybody in Ireland still knows what a banshee is, even if reported sightings seem to have tailed off dramatically since the coming of rural electrification.  But the banshee’s first cousin in the Irish underworld, the lennanshee, remains a much more obscure figure: unlisted, for example, even in Terence Dolan’s Dictionary of Hiberno-English.

This is despite her appearance in one of our most loved and covered ballads. As sung by John McCormack, Dusty Springfield, Van Morrison and others, My Lagan Love introduces her as a simile for the romantic derangement afflicting the narrator, ie: “And like a love-sick lennanshee/She hath my heart in thrall/No life have I nor liberty/For love is lord of all.”

In the Springfield version, the word is pronounced “lennan-he”, in keeping with the fact she’s singing about a man. But the Leanan Sídhe, to use the proper Irish, is usually “she”, in pronunciation as well as gender.  Hence this definition by WB Yeats, which also casts her as a sort of vampire:

“The Leanhaun Shee (fairy mistress) seeks the love of mortals.  If they refuse, she must be their slave; if they consent, they are hers and can only escape by finding another to take their place. The fairy lives on their life, and they waste away.  Death is no escape from her. She is the Gaelic muse, for she gives inspiration to those she persecutes. The Gaelic poets die young, for she is restless, and will not let them remain long on earth.”

Yeats was more than usually vulnerable to this sort of enchantment.  His life was a series of doomed love affairs, with Maud Gonne in particular, in which the unattainable tortured him into verse. Recovering from her, he infamously threw his hat at her daughter Iseult. By the time he married Georgie Hyde-Lees in 1917, he was past the risk of dying young, at least.

At 52, twice his bride’s age, he was also relatively immune to her charms, or at least distracted from them by his obsession with the Gonnes. It partly explains how Hyde-Lees became the most influential of his muses, leanan sídhe or otherwise.

It started, aptly, around Halloween.  As Yeats recalled: “On the afternoon of October 24th 1917, four days after my marriage, my wife surprised me by attempting automatic writing.  What came in disjointed sentences, in almost illegible writing, was so exciting, sometimes so profound, that I persuaded her to give an hour or two day after day to the unknown writer.”

Whether or not she was channelling an occult source, it was a useful strategy for the new Mrs Yeats.   The mysterious outpourings included advice on how her husband should concentrate on his current relationship, improve his sexual technique, and start a family. But if it began as a tactic, Hyde-Lees must have surprised herself at how good she was. The result extended to 3,600 pages and, retouched by Yeats, became a book.

In the meantime it opened the floodgates on his greatest work, from The Second Coming (1919) onwards.  “Had Yeats died instead of marrying in 1917,” wrote biographer Richard Ellmann, “he would have been remembered as a remarkable minor poet who achieved a diction more powerful than that of his contemporaries but who, except in a handful of poems, did not have much to say with it.” Lennanshees were probably not implicated in most of the automatic writing craze that reached its height then.

But the phenomenon added a complication to the “ghost-writer” term, raising the question, when works of literature resulted, of who was the real author: the medium (usually female); the person recording the communications (usually male), or the supernatural entity supposedly channelled. This conflict led to a case taken by Irish writer Geraldine Cummins in 1927. Cummins was by then a professional medium, whose seances were attended by Yeats among others.

In this role she compiled the Chronicles of Cleophas (a lesser disciple mentioned in St Luke’s Gospel), supposedly dictated by the biblical spirit.But when a “psychical researcher” called Frederick Bligh Bond tried to publish the work on the grounds that he had attended the seances and been the intended recipient of the words, Cummins sued. Cleophas was not available to testify, unfortunately. And in general, the judge finding himself to have no power over the afterlife, only England and Wales, ruled that copyright resided with Cummins, as the person who had held the pen.