Howya – An Irishman’s Diary on greetings 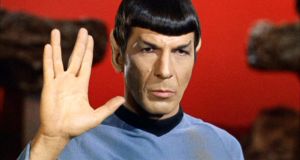 In his Irish Journal, Heinrich Böll reported a brief exchange between a man and woman across a street in Sligo: “‘Howya, Paddy?’, and the old man shouted back: ‘I’m all right – with the help of God and His most blessed Mother.’”

The friendly greeting, “Howya?” is rarely intended to be an inquiry about someone’s health or spirituality but more of passing the time of day. Occasionally the answer to the age-old query provokes a conversational gambit or an organ recital of medical concerns. These can vary from flu, a slipped disc, angina, indigestion, fatigue, high blood pressure or an uncomfortable range of other afflictions relating to the body’s plumbing and scaffolding.

In some parts of Ireland (notably Donegal, Derry and Tyrone), when two acquaintances pass on the street, they will acknowledge each other with a jerk of the chin or nod of the head, followed by a greeting of “S’goin” or “Yes”, without bothering to inquire about any illnesses. Frequently, the reason for this is because they know that they will awaken that person’s inner hypochondriac, preoccupied with a lengthy version of all kinds of maladies. This brief encounter may be stretched to “Yes, Mary” or “Howzit goin’, Sean”, or in northern parts, “Yallrite?”

Students of responses to the question are often bemused by smart-alec replies, while others lack creative thinking. Many answer with the banal “Not so bad” (or “Not so Craigavad”, referring to a townland in Co Down), while a few pronounce a half-hearted view of their lot but cannot be bothered relating a superabundance of health conditions, preferring instead a shoulder-shrug. A few invoke a witticism, an element of humour, or perhaps on the part of the questioner, it may lead to their wishing they had not asked in the first place.

Here are 15 quirky replies to the “Howya” (which can also be spelt “Howaya”, “Howiya” or in parts of the Shannon region, “How’r’ye”) question, eavesdropped and purloined from different regions of the country:

“No worse than usual, thanks.”

“Reeling a little, but there’s always room for improvement”.

“Me bones are freezing but sure every day is better than the next.”

“Am still on the anti-ageing cream, but it’s not a power of use as you can see.”

“I’m better than I was, but not nearly as good as I’m gonna be.”

“I’m breathing and my heart’s still beating, so I must be alive and kicking.”

“Overall I’m better on the inside than I look on the outside.”

“Always getting better, but mainly getting worse.”

“Living the dream, but it’s mostly a nightmare.”

“Awful, but thanks for asking.”

“I’ve a very bad back, but Ballymena Utd have had two bad backs for 15 years.”

Responses to the Howya question have exercised the mind of poets, philosophers, novelists, dramatists and journalists. The writer Laurie Lee liked to reply: “I’m still a going concern, but a little concerned about going.” In Picasso’s case, he was usually to be found “In a state of disconcerted anguish.” The journalist and broadcaster John Diamond’s rejoinder to the query was: “I’m okay I suppose, within the usual existential constraints.”

In Douglas Adams’s book, The Hitchhiker’s Guide to the Galaxy, the earthling Arthur Dent’s riposte was one of the genre’s best: “Like a military academy – bits of me keep passing out.” Henry David Thoreau’s profound, yet instantly recognisable reply invariably was: “I’m leading a life of quiet desperation.” The Italian journalist and writer Tiziano Terzani, who died of stomach cancer in 2004, travelled widely seeking a cure for his illness and liked to retort: “I am very well; it’s just my body that is rotting and I am going to leave it behind.”

If the subject has a patron saint, it is surely the poet Roger McGough whose humour was described by the Guardian as “the sound of laughter coming from the morgue”.

He once wrote: “For centuries the bullet remained quietly confident/that the gun would be invented.”

And in his poem Bits of Me, he takes the proverbial biscuit for his view on the interrogatory question-tag: “When people ask: ‘How are you?’/I say, ‘Bits of me are fine./And they are. Lots of me I’d take anywhere./ Be proud to show off./But it’s the bits that can’t be seen that worry. /The boys in the backroom/who never get introduced /The ones with the Latin names/who grumble on the ceiling when I’m enjoying myself.”