How not to win the technology race with China 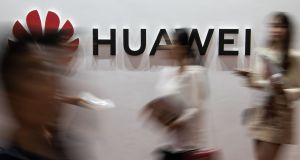 In this file photo taken on August 2, 2019 people walk past a Huawei logo during the Consumer Electronics Expo in Beijing. (Photo by Fred DUFOUR / AFP)

Never mind tariffs and quotas. The animating ingredient of the great power contest between the US and China is the global race for digital primacy. Given the stakes - economic and military - a period of pretty ferocious rivalry is inevitable. The danger is that unavoidable competition will spill over into unnecessary conflict.

Some western governments are still debating whether to allow the Chinese communications company Huawei to supply equipment for the new 5G networks that will underpin critical national infrastructure. The US has said No. So too has Australia. One way for others to think about the issue is to ask whether Beijing would allow their companies to embed such technology in China’s national systems.

Any doubts about the answer will have been dispelled this week by the news that the Chinese government has decreed that state entities and public institutions must remove within three years all foreign computer equipment and software. We are talking here of Beijing ripping out old foreign tech. The idea that it would allow outsiders to play a role in building next generation communications is beyond imagination.

You do not have to believe that Huawei is under the control of the Chinese Communist party to say it would be foolhardy of Germany, France or Britain to allow it a role in 5G. The risks and stakes are too high. These superfast networks will provide the data speeds needed for the next great leap forward - for the internet of things, for greatly-enhanced machine learning and artificial intelligence. The applications, it is already obvious, will be as important in space and advanced military systems as in transforming urban environments and the way people live.

In the circumstances, it goes without saying that China will use whatever instruments it has in an effort to steal a march and, in time, to become the dominant provider and standards-setter in the new technologies. We know this not simply because Beijing has passed an intelligence law that stipulates Chinese companies owe an ultimate loyalty to the state but because, given the chance, western intelligence agencies would not shrink from taking any opportunity that presented itself to get inside China’s networks.

Donald Trump, of course, does not make it easy for America’s allies. The US president’s all-guns-blazing approach is a sure route to a lose-lose rupture with Beijing, reaching well beyond the fact that both sides will always do their best to spy on each other. Mr Trump’s browbeating of allies is counterproductive. Threatening retaliation if they do not follow the US line is a sure invitation to defiance on the part of Europeans.

Cocking a snook at Mr Trump, however, is not a reason for Europeans to ignore their own interests. At the moment they trail in third place. There are those, in Britain especially, who say the risks of Huawei’s involvement can be mitigated by intrusive monitoring. The UK’s secret communications agency GCHQ already has close oversight of the Chinese company’s work in existing telecoms networks. With 5G, though, oversight demands ever-rising resources, and the consequences of getting it wrong are immeasurably higher.

In any event, Europe should be worried about being left behind. It lags both the US and China in technologies such as machine-learning and artificial intelligence. In Nokia and Ericsson, however, it has the only two global players able to compete with Huawei. It would be more than strange to give up this modest advantage by buying Chinese.

Robert Zoellick, the former senior US official and World Bank president, once remarked that the goal of US policy towards China should be to persuade it to become a “responsible stakeholder” in the rules-based international system. Lately, the fashion has been to deride this ambition as naive. Hasn’t Beijing shown over and over again that it is ready to ignore, bend and break the rules in pursuit of its own national advantage?

In part, yes. China’s attempts to game the system are undeniable. It does not follow, however, that the US should become a willing accomplice in the destruction of a set of rules largely designed and made in Washington. As Mr Zoellick remarked in a speech this month to the US-China Business Council, it scarcely serves the west’s interests if the policy of confrontation prods China “into championing a parallel, separate system, with very different rules”.

Rivals need not become outright adversaries. Competition should be a spur to improve one’s own performance rather than an effort to trip over competitors. Put another way, if America wants to win the technology race, it should raise its own game. The alternative approach, seemingly favoured by Mr Trump, focuses on bringing down rivals. That will only spark a broader Sino-American confrontation.

The message to Chinese president Xi Jinping should of course be clear-eyed. Beijing cannot throw up its own barricades and complain when it loses access to advanced western technologies. And there are still great swaths of global policymaking where both will gain from co-operation.

As Mr Zoellick puts it, the way to compete with China is by producing better ideas and smarter technologies, not by bullying and retreating.

Philip Stephens is a columnist with the Financial Times

1 ‘He was some man’: Shane’s journey from care child to fearless activist
2 Mary Lou has to call for the smelling salts as SF councillor deals a knock-out blow
3 Chris Hadfield on the climate crisis: ‘The world has seen much, much worse’
4 Netflix: The best 101 films to watch right now
5 Fine Gael deletes spoof election video after negative response
Real news has value SUBSCRIBE