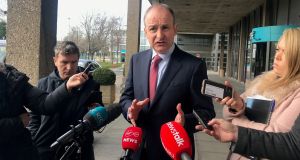 Last week I attended a small gathering of people in Scholar’s pub in Firhouse to support councillor Charlie O’Connor, who is standing in the Dublin South-West constituency for Fianna Fáil. It was a remarkable event in many respects.

The first thing that struck me was the fact that of the five councillors who turned up to show their support, four were women. One of those, Deirdre O’Donovan, is also contesting the general election.

Dublin South-West is a demanding constituency incorporating Tallaght, Templeogue, Greenhills and Rathfarnham. There are significant concentrations of disadvantaged areas and voter turnout is very low. When I represented the area in the Dáil from 1997 to the disastrous defeat for the party in 2011 it was often difficult to find suitable candidates, let alone women candidates.

Under Micheál Martin the party has transformed itself. He is the first Fianna Fáil leader to openly eschew the populist politics of his predecessors. Previous leaders would pronounce the party one of the radical centre. For instance, under Albert Reynolds, the party formed coalitions first with the Progressive Democrats and then with Labour. This propensity to borrow from both left and right reached its high point under the electorally successful Bertie Ahern.

Prior to the 2016 general election Martin put down a marker and defined the party as being social democratic or left of centre. This direction has been underpinned by their insistence on the priority being targeted spending increases, rather than tax cuts, in their confidence-and-supply agreement which has kept Fine Gael in government.

By positioning himself and the party on the left, Martin can make a credible case to parties such as Labour, Greens and the Social Democrats to form a post-election coalition with them. The numbers may in fact add up to make this happen. These three smaller parties currently have 12 seats in the Dáil. The former Fine Gael cabinet minister and commentator Ivan Yates suggests that Fianna Fáil could capture 60 seats and Fine Gael 40.

It is a hard ask but they will not fall too short of it. If they do hit 60 the other three parties mentioned above only have to gather an extra eight seats between them for the slim majority of 80 to be achieved. As against this Yates prediction, based on individual constituency analysis, public opinion poll organisations show the two main parties much closer in percentage terms.

It may be that the Greens could capture much of this needed gain in their own right. The party under Eamon Ryan has rather sensibly stood candidates in virtually all constituencies. Dick Spring and his team of talented advisors did this in 1992 and achieved a huge surge in Labour’s Dáil reorientation – the aptly-named Spring tide. Labour should not be written off entirely. Frequently in more recent history they have won more seats than their overall national percentage has merited through targeting certain constituencies.

Martin has played the long game and in confidence-and-supply terms his decision not to pull down the government early, while the Brexit drama and negotiation has played itself out in Britain, has been vindicated. This means it is slightly harder for Fine Gael to take full credit for its Brexit stance.

Martin has also widened his appeal through his approach to supporting not only the current Government from his position as leader of the Opposition but also, more importantly for his unambiguous support, the two referendums on marriage equality and abortion, despite vociferous objections from his own deputies. This has taken the yoke of clerical-influenced conservatism off the party’s back and plays well with the party’s newer and more rejuvenated membership. It has also made Fianna Fáil are far less transfer-repellent than it was in 2011.

In the 2016 general election Fianna Fáil did not stand enough candidates to effectively win the election. As a result the debate in that election was skewed towards the inevitable return to power of Enda Kenny. This time out, both in the numbers and with its policy platform Fianna Fáil is emphasising that a clear choice is being offered to voters.

The election manifestos will come out this week and a clearer picture of opinion on the ground will emerge 10 days or so more into the campaign.

While Leo Varadkar has the weakness of not having a mandate or an election behind him as Taoiseach he does have a certain presence and his relative youth when compared with Martin is also an advantage. The television debate between the two contenders for power will be compelling viewing with its youth-versus-experience theme and Varadkar’s preparedness to throw stinging punches about Martin’s time in office from 1997 to 2011. Martin may be forced to drop his Mr Nice Guy image to make an impression and land some serious blows.