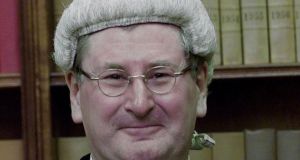 Mr Justice John MacMenamin: participation in a silent protest march about the rule of law in Warsaw was the right thing to do. Photograph: Ronan Quinlan

Judges normally steer clear of partisan politics so it was remarkable that last weekend, Warsaw saw judges from across Europe, including Mr Justice John MacMenamin of the Irish Supreme Court, taking part in a silent protest march.

The march was intended to express solidarity with Polish judges and to support the rule of law following a seemingly endless series of measures enacted by the Polish government that seek to undermine judicial independence.

There are two reasons for this. While judges must steer clear of partisan politics and must appear to be neutral, they cannot be neutral in relation to judicial independence and the rule of law. Judges cannot exercise the function allocated to them by the Constitution unless the courts are independent and free to stand up to the government when necessary.

But this still does not answer why the treatment of Polish judges is a legitimate subject of interest for the Irish judiciary. After all, would Irish politicians been happy if the Portuguese or Latvian governments had sought to intervene in the controversy over Shane Ross’s attempt to change the rules around the nomination of judges in Ireland?

The reality is, with the degree of legal interdependence that exists in the EU, the organisation of the Irish judicial system is not only the business of the Irish people and attacks on judicial independence in Poland, and elsewhere, are of legitimate concern to judges, lawyers and voters in the rest of the EU.

The EU system as a whole, rests heavily on the willingness of national judges to give effect to European law. The union has a very small bureaucracy and cannot function if national civil servants and national courts do not give effect to EU decisions.

What is more, EU law requires judges in one member state to recognise the decisions of judges in other member states. It is for this reason that the Irish courts in the 2018 Celmer case had to ask the European Court of Justice whether, given the undermining of the independence of the Polish courts, they still ought to give effect to the near-automatic transfer of suspects between EU states provided for by EU law.

The large degree of overlap between EU and national competences means it is no longer possible to distinguish clearly between what is a national matter and what is an EU matter.

The European Court of Justice has long made it clear that, while each member state has the right to organize its own judicial system, national judges are also EU judges. This means that the EU has the right to require countries to respect some basic principles, including judicial independence and has repeatedly clashed with the Polish government, faulting their system for disciplining judges and ordering reinstatement of sacked supreme court judges.

The problems that can arise with this overlap are not confined to post-communist newer member states. Last week, the Spanish courts ruled on a politically explosive claim by jailed Catalan nationalist leader Oriol Junqueras, who argued that having been elected as an MEP in June, he ought to be released from prison to attend the European Parliament.

The Spanish court accepted that under a European Court ruling from December it should have allowed Junqueras to be released to carry out his parliamentary functions back in June when he was in pre-trial detention. However, it held that because he has since been convicted and condemned to 13 years in prison, he is now ineligible.

Although the European Parliament accepted the ruling, this is unlikely to be the end of the story. The Catalan leader can challenge the parliament’s decision before the EU courts and appears to have an arguable case given the European Court’s December ruling which stressed that MEPs were directly elected EU officials whose status could not be subject to interference by national bodies.

What is most striking about all of these affairs is how they underline how difficult it is to draw clear lines between what is a national competence and what is an EU competence. The Polish government has found its plans to pack the Polish supreme court blocked because the European Court considers that national judges are responsible for upholding EU law and are therefore also EU judges whose independence must be respected. The Spanish authorities are also discovering that Spanish MEPs are not just Spanish politicians but are EU office holders who may not be capable of being deprived of their office by Spanish law alone.

One of the biggest effects of Irish EU membership has been to open up our political and legal worlds to wider influences. An Irish civil servant or judge of the 1960s could have spent their whole career without meeting a Greek civil servant or without reading a judgment about a dispute before a Hungarian court. But this has changed utterly.

With the degree of interdependence that now exists in the EU, matters such as judicial independence in Poland or disputes around the election of a Spanish MEP which would have seemed exotic and distant a few decades ago are now, quite legitimately, the concern of Irish judges and politicians.

1 Costa living: ‘Move home to Ireland? I’d hate it’
2 Anti-Irish bigotry in Britain has not gone away
3 Steve Coogan: ‘Come Out, Ye Black and Tans is two fingers to the British’
4 When the RIC opened fire on a crowd in Ennis during the Clare grain riots
5 England v Ireland preview: Ireland’s revival to face its sternest test
Real news has value SUBSCRIBE