Google and Facebook can save the news and safeguard democracy 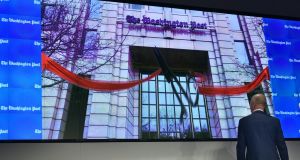 Jeff Bezos, the founder of Amazon, has invested in the Washington Post. Photograph: Mandel Ngan/AFP/Getty Images

This week the chief executive of Facebook – Mark Zuckerberg – announced the recruitment of an additional 3,000 employees to police hardcore videos on his social-media platform. They will join the 4,500 already doing the same thing. At the same time Twitter is battling to manage racist, sexist and homophobic commentary across its platforms. Google is struggling to control highly objectionable content on its Youtube subsidiary. This is far from the narrative about the social-media phenomenon being a benign liberator of free speech and communication across borders and classes worldwide.

Underlying these major issues facing technology giants is the existential threat to traditional media business models. The massive suction of advertising spending away from legacy media outlets and in to the IT ecosystem is hollowing out traditional media. In so doing it is replacing objective independent journalism with a plethora of fake news, unedited content and rampant propaganda.

Democracies and free-market systems have long relied on the fourth estate to provide a counter-balance to power structures. By having an open and transparent media peppered with integrity, democracies can operate around electoral cycles that allow citizens to make political decisions based on facts and proper analysis. In the absence of such perspectives, the field opens up to the loudest and most aggressive voices in the room.

It is against this backdrop that big tech needs to consider its position in the media world. There is a pressing need for the enormous and highly profitable IT companies to invest in truly independent media platforms. Not only would that re-invigorate the role of media in society but it would also make commercial and strategic sense for the technology companies themselves.

Imagine what would be required. An effective independent media platform would necessitate a team of professional journalists that can focus on politics, business and sport as a minimum. They would be equipped with high-tech systems that facilitate writing, editing and disseminating content across primarily digital platforms on 24-7 cycles. Both long-form and short-form articles could be designed and issued to meet varying consumer preferences. Physical daily newspapers – increasingly hamstrung by cost, print runs and inconvenience – are dying and will continue to do so as mobile devices grow in value and capability. New media has to adapt to that structural fact and position itself accordingly.

We can see hints of how this is already happening. Jeff Bezos, the founder of Amazon, has invested in the Washington Post. While he focuses on pivoting it away from physical newspapers and towards online distribution, his editors and journalists have been given a clear mandate: produce world-class journalism. The Washington Post is enjoying buoyant circulation in the wake of the Trump administration but it continues to rely on Bezos for financial stability.

It is time now for some of the other giants of technology to step forward. How far-fetched is it to think about Google funding and establishing a truly independent media platform? Or why is it unreasonable to consider Facebook investing in an all new media room? Is it too much to believe Apple should purchase an ailing title and re-awaken it as a mobile device-dependent Pulitzer prize-winning media entity?

These three companies have a combined stock market capitalisation of $1.9 trillion. What would it cost to create a powerful independent media team? A fully invested platform covering the entire US market, for example, would cost no more than $100 million and probably much less if the content is distributed online. That would be 0.0005 per cent of this group’s stock-market value. In return they would help rebalance a dysfunctional “news” market that is being fundamentally distorted by their own business models.

IT companies have a commercial interest in ensuring online information systems of integrity are accepted by individuals, politicians and regulators

This suggestion is not being proposed as a form of charity. IT companies have a commercial interest in ensuring online information systems of integrity are accepted by individuals, politicians and regulators. Furthermore, these companies could provide this independent journalism via their own networks. If Apple, for example, owned a rejuvenated Boston Globe and distributed it free to its Apple customers, would that help or hinder its own brand? If Google owned the troubled Sydney Morning Herald and made its content free to its users, would that add or detract value from its core? If Facebook bought and re-energised Le Monde, would that be a good or bad thing for owners and readers alike ?

Like it or not, traditional media businesses are in a death spiral. Legacy cost structures and a fundamental shift by consumers towards mobile devices are destroying reliable sources of independent journalism. That journey may lead to the elimination of journalism of integrity unless a new paradigm is developed. The global IT companies have the resources to fix it. It is in their strategic interests to do so but requires a leap of faith to make it happen.

We keep hearing leaders of global IT companies that are now household names professing their profound support for democracy, free speech and social engagement. Yet their business models lie at the heart of a vortex that is threatening those very freedoms. Without hard actions, and tangible investment, the sentiments they express are hollow and ultimately hypocritical. A new flank in the battle against the collapse of independent journalism is urgently needed.

1 Anti-Irish bigotry in Britain has not gone away
2 Steve Coogan: ‘Come Out, Ye Black and Tans is two fingers to the British’
3 Coronavirus: Almost 60 new cases recorded in Italy as two die
4 Ben Affleck: ‘It took me a long time to admit I am an alcoholic’
5 Conor McGregor’s new whiskey: A taste test
Real news has value SUBSCRIBE