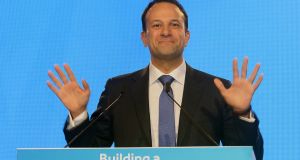 In his first party conference address as Fine Gael leader, Taoiseach Leo Varadkar paid tribute to the Independent members of the government and gave credit to Fianna Fáil for sticking by the confidence and supply agreement. He even said nice things about the Labour Party and the Greens. Photograph: Lorraine Teevan/PA Wire

The low-key tone adopted by Taoiseach Leo Varadkar in his first leader’s address to the party faithful at the weekend didn’t have delegates whooping in the aisles but it was probably all the better for that as far as the wider public was concerned.

The unusually muted atmosphere in the hall during the leader’s speech at the Fine Gael national conference was partly because Varadkar avoided the ritual bashing of political opponents. Instead he paid tribute to the Independent members of the government and gave credit to Fianna Fáil for sticking by the confidence and supply agreement. He even said nice things about the Labour Party and the Greens.

All of this made political sense in the longer term. He needs to keep the Independents on board to ensure the Government survives and there was no point in attacking Fianna Fáil if he wants the main Opposition party to stick with the experiment in “new politics” at least until the next budget. Giving some credit to Labour and the Greens was a shrewd move given that the formation of the next government could involve either or both of those parties.

Fine Gael members may have missed the warm glow of partisan political rhetoric but they were given more freedom to express their own views in the course of the conference than is usual on these occasions. On Saturday ministers had to engage in the equivalent of speed-dating by moving from table to table to take questions from the delegates, and the Taoiseach participated in an open question and answer session. While most of the questions were polite, even obsequious, he did have to deal with some penetrating ones as well.

The relatively open atmosphere at the conference was reflected in the debate on abortion, with supporters and opponents of removing the Eighth Amendment to the Constitution given free rein to air their opinions. There were impassioned speeches from both sides of the argument but a substantial majority in the hall was in favour of some change in the current position, whether removing the amendment completely or making it less restrictive.

This was very different from the mood at the recent Fianna Fáil ard fheis, where a majority of the delegates were clearly against any change in the current position. It gives the Taoiseach and his ministers a relatively free hand in formulating a policy position once the Oireachtas committee on the issue has finished its deliberations.

Getting through his first party conference as leader was another milestone for Varadkar, but the real test of his leadership will not come until he faces a major political crisis.

The antics of the Independent Alliance on North Korea are a warning that unexpected events with the capacity to upend the Government could come out of the blue at any time.

1 Susie Dent: ‘Jimmy Carr is incredibly rude to me. I took it as a compliment’
2 My friends keep mocking my new boyfriend’s small penis
3 Man with electric scooter who died in Meath was due to get married in the coming weeks
4 Trump selects Amy Coney Barrett for supreme court
5 Tour de France: Every yellow jersey winner must feel guilty by some association
Real news has value SUBSCRIBE