Germany’s politics is threatening its role in Europe 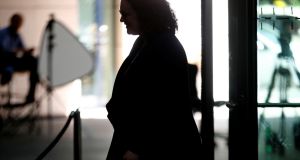 Andrea Nahles: after just 400 days in the job, the SPD leader has handed back the most poisoned chalice in German politics. Photograph: Hannibal Hanschke

If you thought the Tory leadership was the worst job in European politics today, think again. While 13 politicians jockey to succeed Theresa May, there is no queue to lead Germany’s Social Democratic Party (SPD).

On Sunday, after just 400 days in the job, SPD leader Andrea Nahles handed back the most poisoned chalice in German politics. Though just 48, she had a remarkable 30-year career behind her. She had left-wing convictions, a restless rhetorical talent and an off-beat sense of humour – not everyone liked Andrea Nahles, but no one could ignore her.

But that task was nothing compared to the encrusted ideology and deep-seated identity crisis that awaited her as the SPD’s sixth leader in a decade – and the first woman in the job.

Election nights for the SPD are blow after ballot-box blow. A recent poll puts it at 12 per cent support, prompting one regional leader to joke darkly: “There’s not far to fall now.”

So what happened? In coalition government in Berlin with the Christian Democratic Union (CDU) for all but four of the last 21 years, the SPD has developed a taste for power that has deferred its search for a new identity and clouded its appetite for corresponding policy. Ask SPD politicians what social democracy in the 21st century looks like and you will trigger a hail of buzzwords but few practical implementation plans.

The SPD sclerosis is on display again this week. No one who bullied Andrea Nahles out the door has admitted doing so, nor have they explained why she had to go. And, now that she’s gone, no one is rushing to take her place, or saying what they will do better.

No one who bullied Andrea Nahles out the door has admitted doing so, nor have they explained why she had to go

With a cheery “all the best” to waiting journalists, Nahles departed on Monday. Hours later, senior SPD figures trooped downstairs to insist – one after another – why they were not interested in the top job and were not playing hard-to-get.

They all know the knotty, interlinked crises any new leader will face. Chiefly: what is the SPD for? Vocal party leftists who will step up are the same who warned against returning to power last year in the grand coalition with the CDU.

The leftists want Nahles’s successor to trigger a review clause in the coalition agreement and withdraw from government. Take the subsequent electoral hammering, they argue, then start retooling German social democracy for the 21st century.

That assumes, of course, that the SPD has a future in the 21st century. As far back as 1992, German political scientist Ralf Dahrendorf predicted a grim future for social democracy, given how many of its political goals had been achieved.

Third Way politics postponed the day of reckoning, but it crashed in on the SPD in the aftermath of its 2003 welfare and labour market agenda. Two years later, when the positive effects kicked in, the CDU and Angela Merkel were in power to take credit. Merkel, however, managed to leave the SPD with the blame for the reform agenda’s negative consequences, such as an explosion in low-paid, precarious employment.

The SPD’s “kleine Leute” of today are not coal miners but outsourced delivery drivers earning less than Nahles’s minimum wage. The exploitative factory owners have been replaced by online retailers and tech companies who contribute next to nothing to European tax coffers – starving governments of revenue for social spending.

In this battle, the SPD – like its sister parties around Europe – are fighting the forces of globalisation with blunt arrowheads of national competence.

Compounding the SPD’s identity crisis: after 14 years chained together, the grand coalition partners’ politics increasingly resemble each other. Popular support, over 70 per cent in 2005, is now almost half that today.

These former political giants are now easily rattled. An hour-long rant by a German YouTuber with blue hair, and a mass defection of young voters to the greens in the European elections, shamed Berlin’s coalition into admitting its climate policies – in particular the softly-softly approach to crooked car companies – are an embarrassment.

But beefed-up climate policy or welfare reform will fall victim to grand coalition governance: hot air chancellery summits and Fata Morgana political promises that loom permanently on the horizon but are never reached nor realised.

Almost two years after the 2017 federal election, you can count in weeks, not months, the time Angela Merkel’s fourth-term government has been concentrating on policy and not itself.

After an agonising six months to reassemble the old grand coalition, Merkel was paralysed a year ago by a refugee row with her Bavarian allies. After that came disastrous state elections for the grand coalition parties, Merkel’s resignation as CDU leader and the search for her successor.

Paris has given up waiting for Berlin and is looking around European for new options.

Berlin’s lowest-common-denominator coalition may yet collapse, toppled by an ambitious new SPD leader or the resignation of Angela Merkel – to hand her successor the chancellery keys and the incumbency advantage.

Or the new term of European politics in Brussels will be paralysed by Germany’s listless coalition, drifting along like a ghost ship.