A Belfast bakery did not discriminate against a gay man when it refused to bake a cake with a message supporting gay marriage, the British supreme court has ruled. Video: Reuters 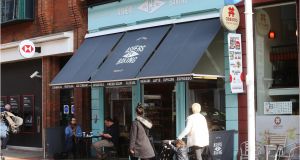 Ashers bakery in Belfast: the owners have won their appeal in the so-called “‘gay cake” discrimination case.

It was always about the cake itself, never the customer. Now the UK’s highest court has come to the very same conclusion. The five justices on the supreme court have unanimously decided that the refusal to make a cake with the slogan “support gay marriage”, by Ashers bakery in Belfast, did not discriminate against Gareth Lee, the LGBT activist who ordered it.

If Ashers had refused to serve Lee because he was gay, then that would have been a clear act of discrimination, and the bakery’s evangelical Christian owners would absolutely have deserved to be prosecuted and fined. But that’s not what happened.

That is exactly the argument I have been making since this costly, divisive case, which was ill-advisedly brought by the Northern Ireland Equality Commission, first emerged in 2014.

Anyone – gay, straight or anywhere in between – who was a supporter of marriage equality could have walked into the Ashers shop on Belfast’s Royal Avenue and ordered a cake with that slogan on it. It was a grave error of logic to assume that a customer asking for a pro-equality message must be gay, and that a refusal to agree to such a request, therefore, made that person a victim of discrimination.

But the far greater danger – as the veteran gay rights activist Peter Tatchell also came to acknowledge, after initially condemning Ashers – is in forcing businesses, by law, to help promote political or religious ideas with which they profoundly disagree.

The potential examples are well rehearsed by now, but no less disturbing for all that. A feminist-owned bakery could be compelled to make cakes announcing that abortion is murder. A Muslim print shop could be required to produce T-shirts emblazoned with Charlie Hebdo-inspired cartoons of the prophet Mohammed.

In an open, tolerant and free democracy, no individual, institution or company should be under any obligation to facilitate the dissemination of beliefs that are antithetical to their own ethos. As Tatchell correctly observed, “discrimination against people should be unlawful, but not against ideas and opinions”.

My own decision to speak out in support of the Christian bakers’ freedom of conscience was an uncomfortable one, and it has cost me a few “liberal” friends: proponents of selective tolerance, who clearly aren’t as liberal as they like to think they are. For decades, I have been a vocal supporter of gay rights, including same-sex marriage, and I deplore the pernicious influence of religious fundamentalism on the politics and society of the North.

To some, standing up for Mr and Mrs on this particular issue was an act of hateful, even fascistic betrayal. A fellow journalist informed me that my views “put me to the right of the DUP”.

So I’ll admit I was relieved when Peter Tatchell revealed his principled volte face on Ashers. It was getting rather lonely, stuck somewhere between the hardline religious zealots of the DUP and the Christian Institute on one side, and the secular piety of the Equality Commission on the other.

Now that the supreme court has handed down its definitive answer, we should spare a thought for Gareth Lee, who has endured a difficult, stressful number of years under public scrutiny, as the case has gone from court to court. It was sad to hear him observe that the refusal of his order made him feel like a “second-class citizen”.

He just wanted to buy a cake for an anti-homophobia event, and I really do wish that Ashers had felt able to provide him with it.

Nor should this verdict be used opportunistically, if Stormont ever returns, as a justification for bringing in a repugnant, DUP-proposed “conscience clause” in the North: essentially a discriminators’ charter, by which businesses could refuse service to LGBT people.

We have the liberty to choose our own political or religious beliefs and stick by them, regardless of how unpopular they may be.

We have the liberty to refuse to have the beliefs of others imposed upon us by an authoritarian arm of the state.

And now that the rights of Christian bakers to their own religious consciences have been fully established, let’s forget this tortuous confection of a cake and turn our attention to something far more substantial: the long overdue right of gay people living in Northern Ireland to get married to one another.

Fionola Meredith is a writer and journalist