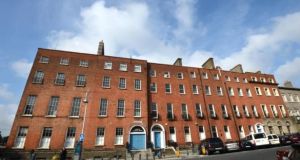 Coláiste Mhuire: today the school is much changed and more progressive. It is co-educational and has moved out of the city centre.

I attended Coláiste Mhuire on Parnell Square. I had enrolled there by choice due to my love of Gaelic games, language and culture, fostered by my nursery, Scoil Lorcáin in Monkstown.

However, the diet served up of fundamental Gaelic Catholic nationalism, backed up by routine severe corporal punishment, acted as powerful aversion therapy.

Leading up to Easter 1966 the school produced a pageant (Glorreim) called Toirse na Saoirse written and directed by the late Tomás Mac Anna of the Abbey Theatre.

I was in the 42Cór reachaireacht (speaking choir), which would stand at the side of the stage and recite lines during the production, dressed in white shirts and the school tie.

We were put through our paces by a Christian Brother, a rotund little man called Kinsella who prepared our segments of the production.

The leather was in constant use and Kinsella had a longer version of the strap. He would challenge a boy who failed to accept the bigger strap. Many opted for it out of machismo and he would deliver unsparingly.

Mac Anna never paid too much attention to us or our counterparts in the singing choir during the long hours of rehearsals which included weekends.

However he was not beyond expressing withering sarcasm towards the older boys who made up the main cast.

It was a step too far for amateur schoolboys who had one eye over their shoulders looking at the lurking Christian Brothers.

The show itself was crowned a success and was attended by Éamon de Valera.

Using the broad stage of the newly constructed Coláiste Mhuire theatre, I remember the climax when, having journeyed through the 800 years of Anglo-Irish conflict, it reached its destination of 1916.

The production wore its patriotic heart on its sleeve and betrayed no trace of the revisionist questioning which has contributed to the narrative in the intervening years.

Even at that tender age, I felt that there was more to the story than was being portrayed.

During the week of the show, Nelson’s Pillar was blown up. One of the Brothers jokingly described it as “cead toradh na glorreime” (first result of the pageant).

Another Brother, who was our class master, was a bad-tempered embittered man, a product of the pre-ban GAA mentality.

One day, he came into the class to supervise a free period during which we were allowed to study or read something deemed appropriately uplifting.

He mused out loud as to what “the men of 1916” would have made of us and whether they would have considered us worth the sacrifice.

With a sigh, he said “Sea, da dtiocfadh Lizzie amárach bheadh fáilte roimpi” (If Lizzie came tomorrow, she would be welcome”).

I, who then as now, had a difficulty in letting such a leading comment go unchallenged, replied under my breath, knowing it was unwise: “Cén fath nach mbeadh?” (Why wouldn’t she be)?

In the seconds that followed, I thought he had finally, after many attempts, managed to wrench my ear from its socket.

The classroom where that happened directly overlooked the Garden of Remembrance.

As I watched on television when Queen Elizabeth placed a wreath in tribute to his beloved “men of 1916”, I allowed myself a wry smile and hoped “that brute’s ghost is at the window”.

I believe Coláiste Mhuire today to be a much-changed and more progressive institution.

The school is now under the patronage of the Edmund Ignatius Rice Trust, although there are no Christian Brothers actively teaching there any more.

I cannot say I mourn their passing.

Seán O’Donnell is a retired civil servant. He spent most of his career at the Department of Foreign Affairs, serving in London, Brussels and the Anglo-Irish Secretariat at Maryfield in Belfast