Forcing families of Troubles victims through the courts is abusive 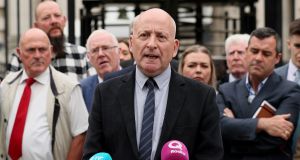 Bea Worton died last week aged 91. She was the latest campaigner for truth and justice following the loss of a family member in the Troubles to die without being afforded either.

Her son, 24-year-old Kenneth Worton, was one of nine Protestant workmen murdered by the IRA in a sectarian massacre at Kingsmill, Co Down, in 1976. The IRA did not admit carrying out the atrocity. In one of her last interviews Bea Morton said, “I think about Kenneth every day and I have his picture sitting here in the house beside me. I brought him into the world and brought him up as best I could.”

During the last two years of her life she fought to overturn the decision by the local council to name a play park after an IRA man who, when arrested later in 1976, had in his possession one of the guns used in the murders. Raymond McCreesh died in the 1981 hunger strike. Some of those involved in the gang at Kingsmill are believed to have taken part in the 1998 Real IRA’s bombing in Omagh.

Also in 1976, 13-year-old Patrick Barnard was among four people, all Catholics, murdered by the UVF in a bomb attack in Dungannon, Co Tyrone. Last week the North’s Lord Chief Justice ruled in a case brought by Patrick’s older brother, Edward Barnard, that the PSNI had acted unlawfully by failing to investigate state collusion with the Glenanne gang that planted the no-warning bomb.

The PSNI’s new chief constable, Simon Byrne, has agreed to set up a new investigation. (Another chief constable already having to face into the past.) Welcoming the ruling, Edward pointed out that 20 people whose family members were among the 120 or more killed by the gang had died since the start of the case he brought in 2015.

When I interviewed Edward then, he told me that his mother kept her youngest son’s jumper under her pillow until she died. Posters celebrating one of the gang members are still erected in Dungannon during this, the marching season.

Edward also talked of the sense of pain that he could feel emanating from the families in the courtroom during the succession of hearings that led to last week’s ruling. “I hope that now we can get something to ease that and that another generation of our families does not have to carry it forward,” he said.

In All Quiet on the Western Front, his novel about the end of the first World War, Erich Maria Remarque wrote: “All these things that now, while we are still in the war, sink down in us like a stone, after the war shall awaken again, and then shall begin the disentanglement of life and death.”

It is painful process, this disentanglement. Every day of the year marks the anniversary of at least one Troubles murder, and families endure their grief in an atmosphere that seems to be getting more rather than less hateful as time passes.

Sales of “I stand with Soldier F” banners with the Parachute Regiment regalia are brisk this summer in loyalist shops and market stalls. This is at once a protest against the decision to prosecute a paratrooper alleged to have killed during Bloody Sunday in 1972, and a calculated insult to those bereaved that day in Derry.

Some, largely from the unionist community, call for a redefinition of the term 'victim'

And, in that city, “Join the IRA” graffiti has been painted on walls close to the homes of friends and loved ones of Lyra McKee, murdered in April by the New IRA, which is still radicalising young people with old slogans about the struggle for Irish freedom, and which has threatened to kill anyone assisting the PSNI investigation of the fatal shooting.

On Friday the Northern Ireland Office quietly released – launched would be too strong a word – an interim summary of the results of a six-month consultation last year into dealing with the legacy of the Troubles. There were more than 17,000 submissions, many of them from groups acting on behalf of victims and survivors of the conflict. There is disagreement among these groups.

Some, largely from the unionist community, call for a redefinition of the term “victim” to distinguish “innocent victims” from people who were terrorists. Others, largely from the nationalist and republican community, reject this notion, seeing it as a way to define those killed by the security forces, and loyalist organisations with which the state colluded, as guilty victims, complicit victims, not, in fact, victims at all.

Groups representing members of the security forces have been encouraged by promises in 2017 from leading British Conservatives, including those close to would-be prime minister Boris Johnson, that a statute of limitations would be introduced to protect police and soldiers from prosecution. One of the few clear outcomes reported in last week’s document is that any kind of amnesty is deemed unacceptable to a majority of those who took part in the consultation. Many, many people across the board want what Edward Barnard’s solicitor, Darragh Mackin, described last week as “the beginning of the end in their pursuance of truth, justice and accountability”.

It is abusive in itself, this constant prevarication, this forcing of people who have already endured the injustice of the murder of their loved ones into endless complex battles through the courts. It is, as the Wave Trauma Centre commented after the publication of the summary report, “unfair and unethical”, not least for the group of people who were seriously injured in the conflict and denied a pension because of political disputes.

It is 20 years since the Eames-Bradley report, and five since the Stormont House Agreement. Now we are told that “the government seeks to move forward sensitively”, that it will use the new report as it “works together with the political parties on the next steps”. And when will it do this? The answer is clear. It will do so “in due course”. Does that sound like a commitment to you?

1 Donald Trump is in trouble, and that could spell very bad news
2 Two teenage girls charged with murder of Cian English on Gold Coast
3 Man airlifted to Dublin hospital after Longford incident
4 Normal People: Full-frontal nudity was not its most radical feature
5 Penneys will not reopen on Monday despite expected changes to lockdown rules
Real news has value SUBSCRIBE