Fintan O’Toole: We must not allow coronavirus pandemic to rob us of grief 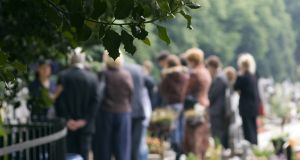 The great vindictiveness of the virus is that it robs us of the rituals of grieving: no wakes, no big funeral Masses or secular celebrations. Photograph: iStock

My grandfather died of an infectious disease, tuberculosis, in 1932 when he was in his early 30s. My mother’s little sister Frances died in 1939 when she was three years old, from diphtheria, an acute bacterial infection. My little brother Colm died in the Coombe hospital in 1965 when a gastric infection swept through a neonatal unit. This is what happened in families before mass vaccination and medical breakthroughs made death from airborne viruses and bacteria rare.

The cruel capriciousness of infection receded to the margins of experience. The terror of germs was forgotten. But the dead were not. I never knew my grandfather or little Frances or baby Colm. But I knew the grief they left behind. My father was two when his father died and he had no memory of him. But once, when we were on the bus to Bray, we passed the old Crinken sanatorium. He shuddered involuntarily. An image from the deep past had come to him: he was walking up the driveway to that building holding his mother’s hand. His father died there, leaving five children.

1 Coronavirus: More ‘striking’ evidence BCG vaccine might protect against Covid-19
2 Last couple in paradise: The honeymooners stranded in the Maldives
3 Eccentric Thai king’s flying visits ensure a colourful German lockdown
4 Donald Trump’s clown car administration has put the fear in all of us
5 Genetics shed light on origins of Irish strains of Covid-19
6 Coronavirus: Public urged to stay at home for Easter
7 Coronavirus: Why are men twice as likely to die as women?
8 Coronavirus: 16 more people have died in Republic as public urged to ‘have patience’
9 Irish doctors on getting Covid-19: ‘In 90 minutes, I deteriorated quite rapidly’
10 ‘It’s just stuff’: Doctor leaves all possessions behind in Australia to return to work in Ireland
11 Boris Johnson in intensive care after coronavirus symptoms worsen
12 Netflix has revealed its most-watched content. You might be surprised
13 Una Mullally: Leo Varadkar’s mask drops again
14 Fintan O'Toole: Crisis management is what the State does best
15 Restarting Ireland: When and how will we ‘get back to normal’?
16 ‘Dad got the Spanish flu’: Clonmel man (104) sees historic lessons
17 Coronavirus: Varadkar returns to practising medicine to help during crisis
18 A doctor writes: Where are all the non-Covid-19 patients?
19 Consultants want private business exempt from national effort to save lives
20 Peter Murtagh in the Americas: 'I’ve left behind something that’s going to get an awful worse'
21 Coronavirus: Dublin nursing homes battling clusters call for more help
22 Conor Wilmot ‘found something on the internet that went wrong’
23 Keeping their distance: Enclosed nuns attract followers via online Mass
24 Coronavirus now under control in Norway, says health minister
25 Coronavirus response: Air passengers could lose refund right under Government plans
26 Coronavirus: Property rental in the jaws of the epidemic
27 What is Houseparty, the app everyone’s talking about – and not in a good way?
28 Beyond the call of duty: Community gardaí help woman move her mother to safety
29 Teaching children the main stress source for families adapting to restrictions
30 Are holidays booked for July and August going to happen?
31 ‘Why did God let this happen?’ People of faith can be people of action
32 Staff in Dublin and Cork airports receive profit share and bonuses for last year
33 Boris Johnson’s deteriorating health comes as shock at Westminster
34 Is ‘herd immunity’ a health policy or a by-product of spreading infectious disease?
35 Coronavirus virtual funerals: 'It’s not the same... very difficult to process'
36 Chopra warns coronavirus will have ‘deeper’ impact than financial crisis
37 ‘No point’ in coalition with FG-FF without two smaller groupings
38 Ready, steady, cook this 10-minute pasta perfection
39 I nearly fainted at the sight of the cream. How can you call that carbonara?
40 The Secret Teacher: Giving students full marks for cancelled tests isn’t fair
Real news has value SUBSCRIBE