Feminist ‘sisterhood’ still has no room for those who choose domesticity

Maria Steen: It takes a pandemic to highlight value of women’s lives lived in service to others 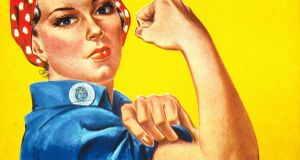 For many feminists, motherhood is the last great oppression: the final roadblock on the path to equality with men.

Now that the country’s schoolchildren must stay home, who will look after them? The answer, in the vast majority of cases, will be mothers. Mothers are society’s insurance policy and safety net: the last line of defence in a crisis. Nowadays, it takes a pandemic to highlight the value of motherhood and domesticity.

Today, we are half-way between International Women’s Day (last Sunday) and Mother’s Day. Last weekend, we were told that we should rail against gender stereotyping, broaden perceptions and celebrate gender non-conforming roles in society. The implication – often stated explicitly – is that “keeping” women in traditional roles is biased and prevents women from achieving “equality”.

There is, however, a difficulty with this project: actual women.

These results tie in with CSO figures for the second quarter of 2019 which found that many more women (31 per cent) than men (10 per cent ) work part-time – and the majority of those women do not wish to work longer hours.

The problem is that many women want to engage in traditional “gendered” roles. I count myself among them. The truth is, I love being a wife and stay-at-home mother. But there is no room in the feminist “sisterhood” for women who choose domesticity.

If feminism meant that woman has equal dignity to man and is entitled to equality of opportunity under the law, then I would be all for it.

Modern feminism is a strange hybrid: the denigration of men mixed with a fetishisation of high-end, male-career choices

However, modern feminism is a strange hybrid: the denigration of men mixed with a fetishisation of high-end, male-career choices, which demands that women act more like men by disavowing their own preferences and inclinations.

Yet when given a free choice, women stubbornly continue to behave in gender-stereotypical ways. We continue to want to have babies, and work fewer hours outside the home than men. As a whole, we continue to favour jobs and careers that are more traditionally “feminine” or that allow us to spend more time with our children and take more interest in domesticity. The solution? Re-education.

The fashion industry – still a draw to the majority of women who like to make themselves look pretty – has got on board. Modern feminism has a coarse obsession with sex and private body parts that would be considered boorish if coming from a man: this season catwalks displayed jackets bearing the ugly slogan “My Body, My Choice” and dresses embroidered with images of female genitalia.

What if you’re a woman who doesn’t want to act like a boorish man? What if you are uncomfortable about major international agencies trying to control (poor) women’s family planning? (Note: despite their saying that women should choose if and when to have children, women who want big families are never encouraged.) What if you don’t like the sexually explicit displays and protests by feminists like “slutwalk”? What if you are happy to belong to the Catholic Church? The message is clear: you are not welcome.

The ultimate traitors, though, are highly educated women who decide to give up their careers to keep house and raise their children. Gone are the days when “motherhood and apple pie” meant what was obviously good. Now we’re all gluten free and motherhood has become a bad word.

For many feminists, motherhood is the last great oppression: the final roadblock on the path to equality with men. The way to overcome it is to diminish the natural ties of maternity – first by “celebrating abortion” and discouraging women from having babies, later by encouraging a woman to spend less time with her children, and more in the company of her colleagues.

If feminism truly valued all women, it would acknowledge the contribution of women who have chosen to raise  children at home

It is not surprising that International Women’s Day should celebrate “trailblazers”, those women who have achieved something spectacular in their careers. That is what history does, to men and women. But if feminism truly valued all women, it would also acknowledge the incalculable contribution of women who have chosen to raise their children at home.

Human flourishing is in the living, not the posturing, whether it be on social media or to the tumultuous applause of our peers. A quiet life lived well in service to others – whether to our own families or to the wider community – is something to be valued and cherished and celebrated, not diminished or held up as an example of yet another gender stereotype to be crushed.

When the coronavirus peaks here in Ireland, and when the State fails to meet the demand for beds and medical care, as it almost certainly will, who will nurse the ill at home? Who will change sheets and make meals and provide care for those suffering in isolation? We all know the answer.

In this time of crisis, as we look forward to Mother’s Day, let us applaud the women who choose domestic obscurity, looking for neither fame nor fortune, but only to serve. Where would we be without them?