Speaking at a #Jobstownnotguilty rally in the Tivoli Theatre in Dublin the Solidarity TD Paul Murphy attacked elements of the media for their coverage of the Jobstown trial. 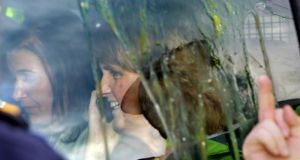 Then tanáiste Joan Burton is confronted by anti-water charge demonstrators in Jobstown in 2014. Photograph: Crispin Rodwell

It is ridiculous to suggest that the prosecution of the Jobstown protesters was a political conspiracy. There is a much more obvious explanation for why people in Jobstown would be subjected to dawn raids on their homes, handcuffed and hit with ludicrously over-the-top criminal charges carrying penalties up to life imprisonment. It’s social class. There is no need for anyone to conspire, or even to think consciously at all, about using sledgehammers to crack nuts and feathers to crush rocks. The justice system is inherently inclined to treat crimes committed by working-class people infinitely more seriously than those committed by supposedly more respectable citizens.

Aspects of the Jobstown protest – particularly the vile misogynistic abuse of two women – were outrageous. But would the protesters have been charged with false imprisonment if they were, for example, farmers? Certainly not. In 1998, farmers staged a spontaneous sit-down protest on the roads around Stephen’s Green in Dublin, trapping hundreds of motorists in their cars for an hour. No one was charged.

In 2003, when farmers drove massed convoys of tractors through Dublin, the Garda (rightly) rerouted other traffic and opened bus lanes for them. A Garda spokesman said the force was pleased at how the protest went: “It was always our intention to facilitate the democratic process and to facilitate people who were going about their business in the city centre . . .”

Much more important, however, is the unspectacular, mundane reality that the justice system is systemically biased. Prisons are mostly for the poor: prisoners in Ireland are 25 times more likely to come from (and return to) a seriously deprived area. And this is not because middle-class people don’t do things that cause dreadful harm to others. It’s because when they do either it is not really seen as a crime or, if it is, they seldom do time.

The classic example of this is, of course, the vast difference in the treatment of those (mostly working-class) who wrongly claim social welfare benefits and those who under-declare tax liabilities. Each of these activities has exactly the same effect on the public finances. A person who wrongly claims about €18,000 in benefits can expect about a year in prison. But roughly 40 per cent of people making self-assessed tax returns (generally self-employed or small business people) underdeclare their taxes by an average of €18,500. Some of this is undoubtedly accidental, but even when people who are caught deliberately evading large sums of taxes are prosecuted and found guilty, they don’t go to jail. As Niall Cody of the Revenue Commissioners put it succinctly: “If the money is paid, sentences will generally be suspended.”

Or think about the immense harm done to homebuyers – and the threats to their lives and safety – caused by cowboy builders. How many of these people are ever prosecuted? So far as I know, none. Deirdre Ní Fhloinn examined 31 annual local authority reports for 2015 but could find “virtually no reference whatsoever to enforcement activities by building control authorities”, let alone to prosecutions. As Ní Fhloinn sardonically (but accurately) suggested, the main remedy available to people who have been harmed in this way is to call Joe Duffy. If there were an Irish Grenfell Tower, would anyone be prosecuted?

If a working-class person steals a substantial sum of money, he or she is a criminal. If an employer takes a worker’s pension contributions, he or she gets a tiny fine and no criminal record. Last December, a Cork plumbing company that deducted pension contributions from its employees between March 2015 and January 2016 but failed to pass them on was fined €500 – the Pensions Authority hailed this as a “warning to all employers” against committing this “very serious offence”.  In February, a company in Cavan that not only failed to pass on pension contributions paid by its employees but refused to produce information on deductions as it was obliged by law to do was fined €1,000 in total for both offences. Oddly, we never hear in such cases of the need to make an example of the offender to deter others.

Does any of this excuse intimidation and misogynistic abuse? Not for a moment. But it does explain why a conscientious jury might be unimpressed by a prosecution that dramatises these double standards. When the law comes down like a ton of bricks on some people and like a soft summer mist on others, faith in the impartiality of the justice system will inevitably erode. Time after time, ordinary citizens see that justice is not blind to social class. One eye is baleful and unforgiving; the other sympathetic and inclined to look away.

A political conspiracy in the Jobstown case would have been quite comforting. Conspiracies take a lot of effort. When the system is already so skewed, why bother?