Trump has put the generals in charge with predictable consequences 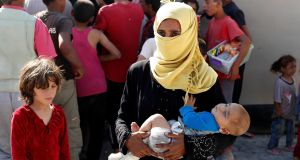 A woman holds her injured child at a camp for people displaced from fighting in the Islamic State stronghold of Raqqa, in Ain Issa, Syria June 14, 2017. REUTERS/Goran Tomasevic

By granting free rein to the Pentagon and commanders in Syria, Iraq and Afghanistan, US commander-in-chief Donald Trump has ceded civilian control over his generals, stoking military escalations in all three theatres of war.

As a teenager, Trump attended a military academy which, he boasted, provided him with “more training militarily than a lot of guys that go into the military,” but, when called upon to perform, he may well have found he does not know enough about soldiering to command.

Even before handing over, Trump had allowed US involvement in these wars to deepen through the deployment of increasing numbers of boots-on-the-ground. By contrast Trump’s predecessor Barack Obama, who sought to run-down US military entanglements, kept a tight rein on the Pentagon.

In April, Trump briefly enjoyed playing commander-in-chief. On the first occasion, over a dessert of chocolate cake with visiting Chinese leader Xi Jinping, Trump ordered a cruise missile strike on a Syrian air base near the city of Homs. The strike was intended to respond to a gas attack blamed on Syrian aircraft on a town in al-Qaeda-held Idlib province. A week later, Trump ordered the largest non-nuclear device in the Us arsenal, the “mother of all bombs,” to be dropped on an Islamic State site in eastern Afghanistan. Both actions were said to be “one offs” but were followed by escalation.

The loosening of constraints on the military coincided with intensification of the US-led air campaign in support of US-allied ground forces fighting Islamic state. Air strikes have killed of hundreds of civilians in Mosul in Iraq and Raqqa in Syria.

US bombs slew more than 100 people in a single strike in Mosul in March and up to 80 civilians last month in the Zinjili district of the city. These were not isolated incidents. UN high commissioner for human rights Zeid bin Ra’ad al-Hussein called on the US-led coalition to “ensure that their operations comply fully with international humani- tarian law and that all possible measures are taken to avoid the loss of civilian lives.”

UN war crimes investigators accused the US and allied Kurdish-dominated DemocraticForces of being responsible for a “staggering loss of civilian life” in the battle for Raqqa and for the flight of at least 160,000 civilians. Human Rights Watch condemned the US introduction into the Syrian conflict of white phosphorus, banned under international law except outside populated areas against concentrations of troops and tanks. The Inter-national Committee of the Red Cross urged those striking urban targets to choose carefully and strike with precision weapons as 70 per cent of all civilian deaths in Syria and Iraq have occurred in Cities.

In its report on the first 1,000 days of US-coalition action, the Syrian Network for Human Rights said 1,256 civilians were killed in the Syrian campaign against Islamic State. On June 18th UK-based Airwars, which monitors US-coalition strikes, put the death toll at 3,962 in Syria and Iraq since the air campaign began in August 2014. These figures are many times greater that official US tolls.

“Mission creep,” justified by alleged challenges from pro-Syrian government forces, is also taking place. After conducting air strikes against Damascus-allied militias in the area in early June, the US deployed troops and truck-mounted missile launchers at al-Tanf base in Syria, placing Damascus within range of these weapons. The US has also shot down two Iranian drones, claiming they were threatening US allies, but stoking tensions.

Although Washington has said, repeatedly, its only goal in Syria is to defeat Islamic State, the occupation of Raqqa and northeaster Syria by US-supported Democratic Forces and al- Tanf base could establish US zones of control once the battle against the radicals has ended.

This strategy would challenge the presence in Syria of Russia and Iran, Damascus main allies. Last Sunday’s downing near Raqqa of a Syrian bomber by a US fighter jet prompted Russia to warn US and allied aircraft may be targeted while in Syrian airspace west of the Euphrates River. Shooting down aircraft would pit Trump’s assertive generals against Russian and Iranian counterparts.

Once Islamic State is defeated, the Pentagon intends to maintain a strong troop presence in Iraq. Defence secretary James Mattis has announced the dispatch of 4,000 troops to Afghanistan to reinforce 8,400 already officially there and 2,000 unofficially deployed. More could follow as no ceiling has been set.

A former Marine Corps general and head of Central Command responsible for US opera-tions in the Middle East, Mattis, known as “Mad Dog,” has advised troops, “Be polite, be professional, but have a plan to kill everybody you meet.” Trump has, so far, failed to check Mattis’ escalations. Putting military men in charge is reckless. They not only ignore civilian deaths but also rely on military force to resolve all manner of problems.