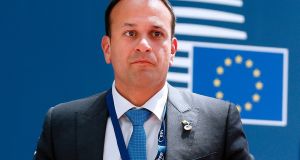 In the 12 months since British voters opted to leave the European Union, the overwhelming Irish focus understandably has been on the need to influence the negotiations between London and the EU27 so as to minimise damage to the island’s economy and the peace process. Just as important, in the long run, is how Brexit will alter the European project itself.

The EU will change profoundly in two years’ time. The broadly liberal economic camp to which the UK, Ireland, the Netherlands and others belong will lose its most powerful member. One of the biggest contributors to the EU budget will be gone. And the centre of gravity will probably shift towards the traditional core, restoring the Franco-German alliance as the union’s engine-room.

An early sign of the emerging dynamic is the latest move towards EU millitary co-operation. An ambitious plan agreed by EU leaders last month would increase defence co-ordination by allowing for a multi-billion euro weapons fund, shared financing for battlegroups and a coalition of the willing to conduct more missions abroad.

Tensions with Moscow, a rising terrorist threat and Washington’s inward turn partly explain the timing, but it is also being spurred by Brexit. The UK has long opposed more efforts to strengthen the EU’s defence capability. But London’s impending departure has given Berlin and Paris, the two chief sponsors of the new initiative, the space to seize the opportunity at a time when both capitals are seeking to inject fresh momentum into the European ideal. They are empowered to do so by a previously dormant provision introduced by the Lisbon treaty – a “sleeping princess” that is about to wake, as European Commission president Jean-Claude Juncker put it.

All of this raises important questions for the Government, which so far has been quiet on the initiative. That “sleeping princess” – formally known as Permanent Structured Cooperation (Pesco) – allows for member states to buy in or stay out as they wish. Ireland has indicated to fellow member states that it is enthusiastic about the project and wants it to be ambitious, but the Government has not yet signalled whether, and to what extent, it might participate.

Our neutrality is an important and valued principle. Taoiseach Leo Varadkar correctly observed that it “actually makes us stronger in the world” and enhanced our ability to pursue some of our key foreign policy goals, not least in the area of international development. Varadkar also noted that co-operation around security and defence was changing in light of the contemporary threats from terrorism and cyber-attacks. In those areas, he said, “we should not be neutral”.

The latest EU initiative will force the Government to identify and make clear just where it sees that line being drawn.