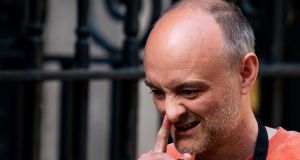 Dominic Cummings should have gone in May, when his contemptuous breach of lockdown restrictions was revealed. Photograph: Aaron Chown/PA

The ancient Greeks knew that the most tragic phrase in any language is: too late. The tyrant Creon, for example, realises at last that he has made a terrible mistake in imprisoning Antigone in a cave and leaving her to die. But when he rushes to release her, she is already dead. His own son and wife take their own lives. Recognition comes too late to stop the forces he has unleashed from reaching their awful conclusion.

Brexit has always had large elements of farce, but as it stumbles towards its end, it has that tragic plot twist: too late. The fall of the Vote Leave regime in London might have been a new dawn for realism. Instead, it is just a cultic twilight, the fag end of a strange infatuation that has already done irreparable harm.

9 Gordon D’Arcy: Time for IRFU to be bold and secure futures of prized assets

10 Joe Biden’s presidential inauguration: Where can I watch, and what are the key moments?

11 Covid-19: AstraZeneca has told HSE vaccine deliveries can be expected by mid-February

19 Baked spuds get a tasty, crunchy filling and topping

24 Fontaines DC are reborn as punk-funk disconauts, and the results are cracking

25 ‘I got a burning smell in my nose’: Third-wave Covid-19 patients share their experiences

26 Woman pleads guilty to having €600,000 in organised crime cash in Drogheda

29 Could talking spread Covid-19 as much as coughing does?

32 What can Ireland expect from Joe Biden?

33 Joe Biden to be inaugurated as 46th US president

34 Gorgeous terrace turnaround is right on track for €445k

35 The best independent Irish craft beers, as voted by brewers

36 Hybrids? Plug-ins? Everything you need to know about electric cars

40 Michael Harding: Talking to strangers. That’s what I miss