Fintan O’Toole: British will soon pick at the scab that will form over Brexit 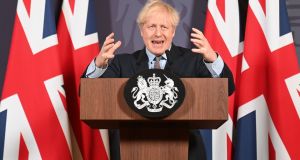 In 2001, a newly elected Tory MP agonised about Britain’s future in the European Union. On the one hand, he dreaded party meetings where fanatics and cranks were forever banging on about Europe: “When, oh when”, he sighed, “will the Tories stop picking this scab? . . . The Tories should talk less about themselves (for which, read discussions on ‘Europe’) and more about what they can do for the country.”

On the other hand, he wanted to be seen as a “moderate Eurosceptic” and a defender of “a thousand years of British parliamentary democracy” against Brussels bureaucrats. (Never mind that Britain was 300 years old and became a democracy in the 20th century.) He had, in fact, built his career by adopting amusing variations on this pose.

6 Exit from Level 5 requires sharp fall in cases and will be gradual, says Tánaiste

9 ‘Horrendously out of proportion’: Residents set against 19-storey apartments

10 ‘I think my husband has a drug problem, but he says that’s nonsense’

12 Who is going to pay for costs of working from home?

16 Joe Biden can bring either unity or change – not both

22 Kathy Sheridan: Pandemic is reminder of poison in British and Irish politics

23 Michael Harding: Just after Christmas, I began talking to the birds

24 Range Rover Sport D350: Fab to drive. But everyone you pass will hate you

28 A sizzling recipe to convert the sceptics

30 Q&A: What are the new Covid travel rules and how will they work?

31 Róisín Ingle: The gin is now part of my daily routine

32 The chickpea stew that broke the internet in the US is here. Give it a go

33 Gordon D’Arcy: Irish lineout has to move past mess of 2020 for the Six Nations

36 Covid-19: Not everyone quarantining at home will face garda checks, Minister says

38 Seán Moran: When GAA players were shyer about being the retiring type