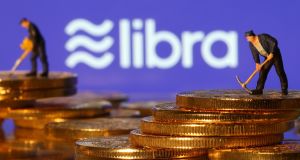 Platforms are the new banks. In China, WeChat Pay and AliPay are hugely popular social messaging apps that allow users to pay in store, transfer money instantly and even apply for loans based on their online histories. In many parts of Africa, India and Afghanistan, M-Pesa is a Vodafone-owned mobile money service that manages payments and savings through text messaging. In the United States, payments app Venmo encourages users to post their transactions in a social newsfeed.

Recently, there’s been speculation about which platform might become the global standard to rival traditional banks. Maybe Apple with Apple Pay and its recently launched credit card? Or Amazon, rumoured to be applying for a financial licence? Facebook’s Libra is the latest contribution. Last week the platform announced plans to release a digital cryptocurrency alongside a blockchain-based payments app in early 2020.

What exactly is Facebook trying to do with Libra?

Given recent data privacy concerns, the news that Facebook wants anything to do with money might set alarm bells ringing. Traditionally, platforms entering the payments arena have adopted a business model based less on charging users a fee to transfer money and more on monetising data about what people spend money on. The data is used for advertising (if you bought this you might like this) or risk assessment (people who buy violent video games are considered less creditworthy than those who buy birdfeeders).

Considering that Facebook’s business model is already based on advertising, it seems obvious that Libra will extend this to payments. But the business model of Libra isn’t about monetising data, or at least, not at first. Libra’s White Paper suggests that Facebook is mostly interested in the one billion people worldwide with mobile phone and internet access but no bank account. The platform proposes the use of a digital cryptocurrency for fast, secure, global money transfers. Libra will charge users a small fee for each transaction. For a vast portion of the world for whom Facebook is already synonymous with the internet, using the platform to transfer money at home and overseas may seem obvious.

As Facebook is already synonymous with the internet, using the platform to transfer money may seem obvious

It’s worth pointing out that Facebook isn’t offering a new solution to the problem of global remittances. M-Pesa processes almost two billion transactions a year. Facebook is, however, in a position to exploit its existing monopoly to eclipse other solutions in the Global South. In places where people have ready access to financial services, Facebook stands to act as a payments intermediary, providing users with a convenient way to pay online and in-store. The goal here is to use an existing monopoly to siphon off some of the fees currently going to Western Union, Visa and relatively new entrants like M-Pesa.

Libra suggests that Facebook is diversifying its business model away from advertising. But this doesn’t mean that Facebook won’t try to monetise transaction data in the future. While much of the White Paper describes how Libra can be used to liberate the poor and underbanked from financial insecurity, discussions of “financial inclusion” and access presume additional services such as credit in the future.

One can speculate that, at this point, transactional data coupled with social media data (what you like, who your friends are etc) might provide the ideal basis for in-app scoring and assessment. Furthermore, the membership structure of the Libra association, a consortium of 28 investors including partners in telecommunications (Vodafone), payments (Mastercard, PayPal, Stripe), ecommerce (Spotify, EBay, Uber) and micro-lending (Kiva), suggests that the bigger picture is probably an integrated “superapp” to rival the likes of China’s WeChat Pay and AliPay.

In the future this might be an app where you can message friends, shop, order an Uber and apply for a loan, all in one environment. The White Paper stresses separation of social and financial data and claims that financial data gathered won’t be used for targeted advertising or shared with Facebook or third parties “without consumer consent”. But if Facebook controls everything from your social connections, to your payments, through to your identity, what choice will a user really have to refuse or to opt out in the future?

In the future this might be an app where you can message friends, shop, order an Uber and apply for a loan, all in one environment

Offering financial services also requires KYC (know your customer), meaning that the payments app needs to be able to verify and prove a user’s identity. Libra suggests that Facebook is not only developing a global currency to bypass the banks, but also using cryptographic techniques similar to those used by bitcoin to develop what they are calling a “portable digital identity”. Couple this with Facebook’s recent foray into a “trustworthiness score” for its two billion users, and you have something that looks a lot like Chinese Social Credit, a national identity system rolling out in 2020 that ranks and penalises Chinese citizens according to their online and offline behaviour.

When a platform with this monopoly issues what amounts to a global coin and identity system, this has huge implications for the future of money, privacy and the overall structure of the global economy. Of course, Libra may come to nothing more than a White Paper faster than you can say “Google Glass”. This isn’t the first time Facebook has attempted to launch a digital wallet. The growing popularity of Bitcoin might be one thing, but when a force the size of Facebook launches a digital cryptocurrency to rival the state-backed money system, financial regulation won’t be far behind.

Comments from international regulators already suggest that Libra will face significant hurdles if it intends to negotiate issues such as money-laundering, counterfeiting and tax evasion. Traditional banks were notably absent from Facebook’s investment association.

Dr Rachel O’Dwyer is a lecturer in digital culture at the National College of Art and Design, researching digital money, blockchain and platforms

2 Fairytale castle in Kerry sold for €4.5m after 13 years on market