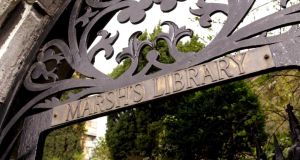 ‘The current exhibition in Marsh’s, which runs until the end of August 2015, examines what Joyce read during his visits to the Library in October 1902. Strangely, for somebody usually seen as one of Ireland’s most famous non-believers, he was interested in St Francis of Assisi and the Franciscan tradition.’ Photograph: Bryan O’Brien

Yesterday marked 133 years to the day since James Joyce was born. Like many people, I have long had mixed views about Joyce. I enjoyed Dubliners very much, and have even reread it a couple of times for enjoyment. I can see merit in both the Portrait and Exiles.

I always felt out of my depth with Ulysses, but have had a sneaking regard for the chancer who could pen Finnegans Wake and present it to the world with a straight face.

Over the past year, though, I have read Joyce with a new eye to curate an exhibition entitled James Joyce: Apocalypse and Exile for Marsh’s Library. My colleagues on this project have been John McCafferty and Marina Ansaldo in UCD, and Anne­ Marie D’Arcy at University of Leicester.

I had always thought that Joyce’s writings have something of the mouthy, flashy undergraduate about them. I am surprised to report that I have overcome most (but not all) of my ingrained and long-standing prejudices.

Frankly, I have been taken aback by the breadth of his reading in a variety of strange and unlikely sources. I have definitely warmed to the old scoundrel, even if I still can’t work up much enthusiasm for Finnegans Wake.

The current exhibition in Marsh’s, which runs until the end of August, examines what Joyce read during his visits to the library in October 1902. Strangely, for somebody usually seen as one of Ireland’s most famous non-believers, he was interested in St Francis of Assisi and the Franciscan tradition.

Joyce was evidently rebelling against his Jesuit education, but was not yet ready to break with the church. It would be too much to say that he had a great devotion to Francis, but he was, for a period, attracted by the radical poverty and simple piety that he advocated.

Indeed, the novel Stephen Hero suggests that, at this time, Joyce went “every Sunday evening to the church of the Capuchins” in Church Street. Joyce admired the person of Francis, was charmed by the old-fashioned Italian of the texts he read about him, but “knew, by instinct, that S. Francis’ love­chains would not hold him very long”.

His interest in il poverello of Assisi had led him to read works in the National Library and UCD by Michelet, Renan, Ibsen and Yeats, which mentioned a radical strain of Franciscanism that was inspired by the writings of a monk named Joachim of Fiore (1135-1202).

Joachim’s historical and biblical writings were unproblematic in themselves, but a group of Franciscan “spirituals” used them to compose attacks on the corruption of the papacy.

Some of these “spirituals” misquoted Joachim to announce the supremacy of the Franciscans above the church as a whole, and to declare Francis’s status as a prophet.

It was to Marsh’s Library that Joyce came to access this persecuted, deeply heretical strain of medieval Catholic thought, which, for obvious reasons, was not to be found in either UCD or the National Library.

Yet, Joyce was also deeply interested in the Irish Franciscan tradition. After all Finnegans Wake opens with the words, “riverrun past Eve and Adam’s” – n other words, the Church of the Immaculate Conception attached to the Franciscan friary on Merchant’s Quay, Dublin.

Finnegans Wake frequently refers to, or cites, the great Irish Franciscan authors of the 17th century. These men were forced into exile on the continent in order to follow their faith and scholarly callings.

Joyce’s references to Franciscans such as Mícheál Ó Cléirigh, John Colgan, Patrick Fleming, Hugh MacCaughwell, John Punch and Luke Wadding are not always entirely flattering, but his engagement with their work is extensive and significant.

This exhibition calls attention, for the first time, to the influence of these Franciscans on Joyce’s self-image as an intellectual forced to live abroad to write the defining works of his nation and time.

It helps to explain what Joyce meant when he said in a lecture on Irish history given at Trieste in 1907 that “even today the flight of these Wild Geese continues”.

Dr Jason McElligott is the keeper of Marsh’s Library