The Turkish president’s ability to control migrants is less than he makes out, and he has much to lose 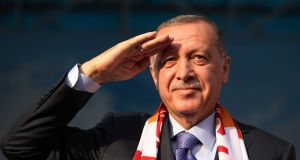 Turkish president Recep Tayyip Erdogan: he knows the EU’s deepest fear is around refugees, and will ruthlessly exploit it as he tries to escape serious censure for Turkey’s operation against Kurdish-led forces in northeastern Syria. Photograph: Reuters

Authoritarian leaders know a soft spot when they see one. When Turkey’s President Recep Erdogan made headlines this month with a loaded offer to send 3.6 million refugees to the EU he was following a long tradition of prodding the bloc exactly where it hurts.

It was a page from the playbook of Colonel Muammar Gaddafi, who revelled in using Libya’s proximity to the Italian island of Lampedusa and the country’s huge migrant workforce as a tool to extort money and goodwill from the EU.

In 2010, when visiting Rome, he warned of an “influx of starving and ignorant Africans” unless he was paid off. The EU duly came up with a pledge of €60 million in aid in exchange for plans to “develop our co-operation on migration-related issues”.

Erdogan’s language was less offensive, but the implication was the same: he knows what the EU’s deepest fear is, and will ruthlessly exploit it as he tries to escape serious censure for Turkey’s operation – currently on hold under a Washington-brokered ceasefire – against Kurdish-led forces in northeastern Syria.

It was not the first time Erdogan resorted to blackmail. Since March 2016, when the EU signed a deal with Turkey to stem the number of refugees crossing the Aegean Sea, Turkish officials have regularly wielded the migration card.

Just a few months after signing the deal an Erdogan adviser threatened to scrap it unless the EU lifted visa requirements on Turkish citizens. In spring 2017, during a row over a referendum on increasing Erdogan’s powers, the Turkish foreign minister said they could “blow the mind” of Europe by sending 15,000 refugees their way each month.

And the EU has made it so easy for them. In the years since the 2015 crisis the bloc has fallen into a cycle of hostility and fear. Far-right, nationalist and populist parties skilfully exploited the refugee crisis to boost their support, and rather than challenge the hateful rhetoric many mainstream parties adopted their language and policies.

The result is a dire situation for refugees and migrants heading to Europe today. Conditions for people trapped on the Greek islands are abysmal, with 30,000 people living in camps designed for a fraction of those numbers.

Hungary has been denying food to people locked in its migrant jails on the Serbian border.

More than 1,000 people are still dying every year as they try to cross the Mediterranean to seek a better life.

While the people suffer EU governments remain locked in an eternal battle over who should care for them. But as the bloc sacrifices its moral authority to portray itself as tough on migration for a domestic audience, it comes across as divided and paranoid to a foreign one.

The language used to describe Erdogan’s comments last week showed how far down the path of hate we have gone: media across the political spectrum used words like “threat”, “flood” and “invasion” – dehumanising terms which stir the sense of being under siege and play into the hands of populists like Erdogan.

But do his threats ring true? The 2016 deal offered €6 billion in aid to improve conditions for refugees living in Turkey. In exchange Turkey promised to crack down on people smugglers and agreed to take back failed asylum-seekers from Greece.

Just a tiny proportion of people have been returned, and it is notoriously difficult to disrupt the smuggling networks. What did work was making life in Turkey more bearable.

Recently, however, the Turkish government has responded to a struggling economy by scapegoating refugees, detaining and deporting some back to Syria. The result was immediate: in September more than 10,000 asylum seekers arrived in Greece, the highest monthly number since 2016. So numbers are already increasing, and it is unclear what Erdogan could do to boost them further.

When Gaddafi was eventually cornered by a Nato offensive in 2011, he made good on his warnings and forced thousands of migrants on to boats at gunpoint. Erdogan would not do the same. He has too much at stake in his relationship with the EU: economic ties, the lure of membership one day, ongoing talks about visa-free travel for its citizens.

The EU must keep all this in mind as it formulates a response to Turkish military aggression. So far it has been weak and divided, failing to agree on any sanctions or a binding bloc-wide arms embargo.

With the US becoming increasingly insular there is an opportunity for the EU to fill a global vacuum and offer much-needed moral leadership. But it needs to start at home, being tougher on member states which abuse migrants, curbing its own hostile language, and finally establishing a mechanism for dealing with any increase in migrant arrivals without falling into backbiting and disarray.

These policies would lessen the space for blackmail by populists and despots around the world, and allow the EU to really step forward. But if the face it portrays to the world is one of insularity and fear, no one is going to pay much heed.

Charlotte McDonald-Gibson is the author of Cast Away: Stories of Survival from Europe’s Refugee Crisis

1 Irish tourists excluded from visiting Greece and Croatia
2 50 things to do in Ireland this summer
3 We need to pay very close attention to what is happening in Britain now
4 Remaking Ireland: Five positives from the pandemic
5 Great reads: 20 books to unwind with this summer
Real news has value SUBSCRIBE