Education policy seeks to diminish status and morale of researchers 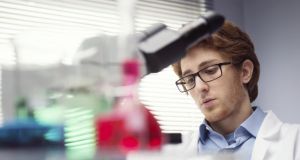 “If we achieve the predicted return to economic progress in Ireland and elsewhere, it is reasonable to predict that our finest researchers will avail of the opportunity to emigrate to where their work is more valued. The damage to our research programmes will be immense.” Photograph: Getty Images

While research faces significant obstacles in Europe, Ireland’s national research policy is facing an even more alarming crisis as it continues to ignore and operate counter to consistent EU recommendations on development of research and innovation.

Every year, our universities spend many thousands of euro of taxpayers’ money trying to prove that researchers are not entitled to be covered by our national employment laws.

Several universities, represented by some of the most expensive law firms in western Europe, have advanced the argument that researchers cannot be given security of employment because universities have a “mission” to provide a “revolving door” system of employing researchers.

In plain English, they reserve the right to give researchers short-term contracts so that they can be replaced by other researchers on equally short contracts. They use this licence to create insecure employment – not to create a rotation of researchers, but to retain experienced personnel for up to 10 years on the same level of insecurity as applied in their first year in the job.

This strategy flies in the face of conclusions on progress in the European Research Area (ERA) published last year, in which member states were asked to accelerate national reforms to boost the EU’s potential in research, development and innovation.

The new Horizon 2020 programme emphasises the importance of ERA in the context of the “Innovation Union” and the Europe 2020 strategy for growth and jobs. As far back as 2007 the Green Paper on ERA emphasised that training, attracting and retaining more competent researchers was vital.

Instead, university policy here, aided and abetted by the Department of Education, has consistently sought to diminish the status and morale of researchers, male and female alike.

UCD has stated publicly that it does not believe that research is a career at all, seeking to classify researchers as “trainees” – forcing them to work for up to 10 years after achieving a PhD before being regarded as “fully fledged”.

In UCC, employees of the Tyndall National Institute (“Ireland’s premier research institute” according to the Government) have been fighting for years to achieve recognition of their status. While UCC says it is supportive, the Department of Education has objected to every initiative designed to recognise the work of these “world-class researchers”.

A spokesman for NUI Galway recently told an astonished Labour Court its policy was that not one single researcher in its employment was entitled to the same job security as has been afforded to all public servants in return for accepting very significant cuts in salary.

Maynooth University tried to convince the authorities the researchers they employed were, in fact, not employees at all. They were guests. Thankfully, the Labour Court agreed with the Irish Federation of University Teachers that this claim was nonsensical although, ominously, UCC has begun to use the word “hosting” to describe its relationship with people who enhance the international profile of the college by engaging in ground-breaking research.

Several ministers of state charged with advancing research policy have ignored repeated requests for an intervention that would reflect some sense of joined-up thinking. If we achieve the predicted return to economic progress in Ireland and elsewhere, it is reasonable to predict that our finest researchers will avail of the opportunity to emigrate to where their work is more valued. The damage to our research programmes will be immense.

Research without researchers The precarious employment status of Irish researchers is one of the worst in the world. There is an inherent flaw in our research policy, a mistaken belief research can be enhanced and elevated to a national priority without having regard for actual researchers. Wouldn’t it be better to begin treating researchers as fundamentally important to any programme of research, and afford basic employment rights?

At a meeting in Brussels on March 18th, the European Trade Union Committee for Education, representing 11 million members in 129 education unions in 45 European countries, discussed the issues of short-term contracts and “denigration of research and researchers”. It is seeking urgent action by European ministers for higher education at their next meeting in Yerevan, Armenia, on May 14-15th.

Meanwhile, a joint declaration by the European Federation of Education Employers and the European Trade Union Committee for Education some months ago called for dialogue between universities and researchers and trade unions and employers.

Opening up such a dialogue in Ireland would be a first essential step to restoring morale and offering recognition of the contribution that research and researchers make to our society.

1 How much coffee should I drink? How much is too much?
2 Gardaí investigating four-lane motorway sulky race
3 I decided that day if I start working for myself at least I'll know where I stand
4 Newton Emerson: Under what conditions would FF or FG share power with SF?
5 Bloomberg attacked from all sides in heated Democratic debate
Real news has value SUBSCRIBE