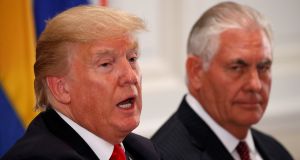 US president Donald Trump with his secretary of state, Rex Tillerson, who has received a letter from 32 members of Congress, both Republic and Democrat, arguing that it is imperative that the US have a representative in Northern Ireland. Photograph: Kevin Lamarque/Reuters

The prospect of complete disengagement by the United States from the Northern Ireland peace process could not have arisen at a worse time given the political stalemate at Stormont and the imminence of Brexit.

The appeal by 32 members of the US Congress to the Trump administration to reconsider the decision not to appoint a new special envoy to the North is a welcome development which hopefully will not fall on deaf ears. A letter from those Congress members, Republicans and Democrats, to Secretary of State Rex Tillerson has pointed out that the US role in the Northern Ireland peace process was indispensable. Tillerson has indicated that he intends to abolish all US special envoys as the current administration focuses on a more US-centred foreign policy. That policy was at the core of President Trump’s speech to the UN on Tuesday.

The letter from the members of Congress, drafted by Congressman Richard Neal, the co-chair of the Friends of Ireland committee, argues that it is imperative that the US has a representative in Northern Ireland who remains engaged with “the five main political parties, and the Irish and British governments, to encourage fresh talks and help break the deadlock”. The letter said Brexit was of equal concern given its potential implications for the peace process.

American involvement has played a crucial role on a number of occasions over the past 30 years in the drive to bring peace to the North. President Ronald Reagan intervened at a critical stage in the 1980s to encourage British prime minister Margaret Thatcher to find agreement with taoiseach Garret FitzGerald on the basis for the Anglo-Irish Agreement of 1985.

The impact of successive envoys, who have been respected by the two governments and the parties in the North, has been incalculable

President Bill Clinton went one step further both in his personal commitment to the peace process and his inspired decision to appoint senator George Mitchell as a special envoy in 1995. Mitchell was later appointed as chair of the talks that led to the Belfast Agreement. His patience and impartiality were vital in those talks, which eventually resulted in an agreement on Good Friday 1998.

Since then there has been a succession of highly qualified and competent special envoys who helped ensure that the agreement survived despite a number of bumps along the road. President George W Bush appointed senior diplomat Richard Haass as special envoy and he, in turn, was succeeded by Mitchell Reiss and Paula Dobriansky. In more recent years, President Barack Obama appointed former Colorado senator Gary Hart to the position.

The impact of successive envoys, who have been respected by the two governments and the parties in the North, has been incalculable. It would be a great pity if the position is now allowed to lapse at a time when regrettably once again, US involvement could be so badly needed.