Trump’s America: A country torn down the middle

The Trump’s America series reminds us that the president has a broad base of supporters, geographically as well as socially, among the 63 million people who voted for him 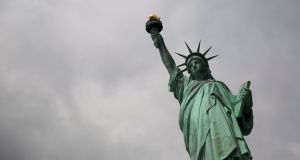 ‘They need to give him a chance. The liberal media want him to fail, but I think he is trying to do good things.” This view of President Donald Trump comes from Linda in Broken Bow, Nebraska, as reported in a two-week series on Trump’s America by Suzanne Lynch. It expresses a common view among his supporters in the states she visited. They admire his business credentials, can-do spirit, support for the free market and conservative values. That he relies on this bedrock of support and continues to play for it is often missed by his liberal critics.

Division and polarisation have become such central features of US politics that debate on Trump’s policies and initiatives reflects highly partisan positions. Political leaders, activists and commentators rely on polarised media, often talk past one another, and too rarely escape their insulating silos. Trump thrives on liberal hostility, as was amply demonstrated in his comments on the white supremacists in Charlottesville last week. They crossed the line separating free speech from hate speech, as does his insistence on a criticism of “many sides”. It remains to be seen how much this affects his core support, which survives despite his low overall approval ratings.

The series reminds us that the president has a broad base of supporters, geographically as well as socially, among the 63 million people who voted for him. Most are white, reflecting the Republican party’s strength among that group, along with Trump’s ability to turn the Democrats’ resort to identity politics among black and Hispanic voters to his own electoral advantage. His systematic efforts to reverse Barack Obama’s legacy reveal the deep salience of inter-racial relations in US politics. Trump’s base crosses class lines too, drawing widespread support from rich and better-off voters as well as from the white working class ones whose interests and values he supposedly champions. They are a key swing group, especially in neglected rust-belt states, but they are not the core demographic group of his supporters.

In Tennessee, Arkansas, Mississippi, Alabama, Texas, Nebraska, Utah, Virginia and North Carolina Republican and Trump supporters reflect older polarisations of race, class and civil war politics in the South. The better-educated support Trump more in these states than in northern and maritime ones, where college education is a key predictor of anti-Trump feelings. Large numbers of people resent the cosmopolitan values of majority Democratic states and remain willing to give Trump a chance. His presidency has dangerously deepened US divisions and polarised opinion for and against him. He has yet to deliver on positive plans for renewal, concentrating more on deconstructing Obama’s legacy and offending US allies internationally. But he retains his core support after a turbulent seven months in power.