The Irish Times view on trust in politics: corroding democracy

A downward trend in voter participation should cause concern not just to politicians but to advocates of a vibrant, democratic system of government 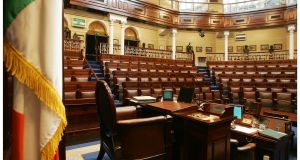 Trust in politics is a fundamental requirement in a functioning democracy and, unfortunately, it has come under great stress in recent years. Photograph: Alan Betson

For the first time in the history of the State, fewer than half the number of registered voters participated in the local and European elections last year.

It has been suggested that voting registers are inaccurate and partly to blame. Whatever about that, a downward trend in voter participation should cause concern not just to politicians but to advocates of a vibrant, democratic system of government.

Trust in politics is fundamental in a functioning democracy and, unfortunately, it has come under great stress in recent years. Unsavoury and erratic behaviour in leading democracies, not least the United States, bleed into public consciousness and affect perceptions of all politicians. The shambles at Westminster and the rise of far-right parties in Europe doesn’t help. Ireland had its own demons, arising from the economic collapse that ended the near-hegemonic status of Fianna Fáil, where support levels had persistently exceeded 40 per cent of the vote.

The fracturing of political structures brought the rise of Fine Gael and the Labour Party and the emergence of strong support for Independents and Sinn Féin. Years of harsh economic reform saw partial recovery for Fianna Fáil, the decimation of Labour and Independents taking 20 per cent of the vote.

A minority Fine Gael-led government emerged in 2016, dependent for its survival on a handful of Independents and a confidence-and-supply arrangement with Fianna Fáil.

It is not possible to equate trust in politicians with voter turnout. But there is a solid connection in terms of public engagement with government formation. Anything that damages that linkage, through inappropriate personal behaviour, should be called out.

Abuses of the system of “fobbing”, involving signing on for the Dáil in order to qualify for attendance allowances, is a particular concern. It contributes to the cynicism many people feel towards politics and politicians. The same holds true for the controversy that erupted over TDs voting on behalf of absent colleagues.

These matters have technical solutions. A single “fobbing” station at Leinster House that was left without video surveillance can be regularised, while the Dáil voting system may be upgraded to incorporate fingerprint authentication.

There are other issues. A Government practice of blocking Private Members’ Bills by invoking “money message” provisions should stop.

A general election will probably occur within six months. There is time to deal with contentious matters and reassure voters their best interests lie in choosing politicians they can trust. Otherwise, a decline in the 65 per cent turnout from the 2016 general election can be anticipated, along with further political fragmentation.

1 Ireland among countries urged to consider reinstating Covid-19 restrictions
2 Lowest numbers in two weeks as one more Covid-19 related death and 35 new cases reported
3 Ward at Naas General Hospital closed due to suspected Covid-19 outbreak
4 Government begins work on new medium-term plan for Ireland in Covid-19 era
5 ‘I’ve been sleeping with my girlfriend’s sister. I need help. What do I do?’
Real news has value SUBSCRIBE