The Irish Times view on the Google protests: taking a stand

November 1st, 2018: Google staff in Dublin joined thousands of colleagues across the world in staging a workplace walkout in protest at the company’s lenient treatment of executives accused of sexual misconduct. Video: Ciara O'Brien 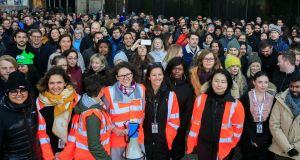 Some 20,000 Google employees worldwide – more than one in five, including staff based in Dublin (above) – left their desks to gather outside their workplaces in an unprecedented mass walkout Thursday morning. Photograph: Gareth Chaney/Collins

Public protests by employees are fleetingly rare in the technology industry, but some 20,000 Google employees worldwide – more than one in five – left their desks to gather outside their workplaces in an unprecedented mass walkout Thursday morning. In Dublin, over a thousand Googlers joined global colleagues in the protest to express anger at the company’s handling of sexual misconduct allegations against executives and to demand changes.

Earlier in the week, the New York Times had revealed that the company had provided a $90 million (€79 million) severance package in 2014 to Andy Rubin, the creator of the company’s Android mobile phone operating software, without publicly disclosing that his departure was prompted by accusations of sexual misconduct (an allegation Rubin denies).

Thursday’s mass walkout is a brave and significant development, especially in a bellwether company in this largely non-unionised sector

On Thursday, Google chief executive Sundar Pichai told employees by email that the company now takes a “hard line” over such allegations. He revealed that 48 people, including 13 senior managers, had been fired for sexual misconduct in the past two years. However, others were terminated without such huge severance packages. Thus, the treatment of Rubin has ignited the ire of employees, who suspect a culture of protectionism for powerful men at the top of a male-dominated company. In recent times, the broader issue of the dearth of STEM women in this too-often unwelcoming industry has prompted women at Silicon Valley companies to disclose egregious workplace practices. They say their complaints of harassment and discrimination are ignored, while male colleagues and executives are shielded.

However, Thursday’s mass walkout is a brave and significant development, especially in a bellwether company in this largely non-unionised sector. Coming only a few months after more than a thousand Google employees signed a letter of protest over the company’s involvement in building a censored search engine for the Chinese government, the latest protest shows a visible and vocal willingness to demand real change across this powerful industry.