The Irish Times view on Northern Ireland’s political impasse: parties must come together

October 3rd, 2017: Sinn Féin Northern leader Michelle O’Neill clashed with the leader of the DUP over whether or not Northern Ireland was British at the Tory Conference. Video: BBC Northern Ireland 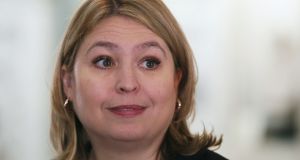 The proposal by Northern Secretary Karen Bradley to bring in an external mediator to try and kick start talks about re-establishing the power sharing in Northern Ireland is a welcome development. Photograph: Brian Lawless/PA Wire

The proposal by Northern Secretary Karen Bradley to bring in an external mediator to try to kick start talks about re-establishing power-sharing in Northern Ireland is a welcome development. At the very least it suggests the impasse in the North has not been forgotten about by the British government as it wrestles with the complexities of Brexit and the future relationship between the UK and the EU.

The reality, however, is that progress seems further away than ever. After representatives of the Northern political parties met Bradley in Belfast yesterday, the discussions were described variously as “a complete waste of time” and “a box ticking exercise”. Alliance Party leader Naomi Long characterised relations between the parties as being at “an all time low”.

The Northern Secretary will be in Dublin today for a meeting of the British-Irish Intergovernmental Conference. She will be accompanied by Cabinet office minister David Lidington, who is the effective number two to Prime Minister Theresa May, for discussions with Minister for Foreign Affairs Simon Coveney and Minister for Justice Charlie Flanagan. The agenda includes the British-Irish relationship after Brexit as well as the impasse which has seen the North without a devolved government for the past 21 months.

In light of the effort being made in the talks between EU and British negotiating teams on Brexit to ensure that the Belfast Agreement is not undermined, it is truly ironic that the two main parties in the North are unable to work its provisions in the interests of the people they represent. It is deeply frustrating that the Democratic Unionist Party (DUP) and Sinn Féin are so bogged down in a complex wrangle of their own making that they cannot operate institutions that were specifically designed to enable them to cooperate.

The people of Northern Ireland have been let down at a critical time when decisions are being made that will influence the region for generations to come. There is precious little likelihood of a breakthrough before the Brexit talks reach a conclusion over the next month or so, but it is important that the two governments agree on a way forward.

Coveney contended in advance of today’s meeting that it showed the shared determination of both governments to get the power-sharing institutions operating effectively again and demonstrated, in spite of the challenges of Brexit, that the Irish and UK governments were committed not only to developing the relationship between the two countries but looking at ways to maintain and deepen their engagement.

This is a very important consideration. The advances in the relationship between our two countries in recent decades must not be jeopardised by the strains that have developed in the Brexit negotiations.

1 Trump refuses to commit to peaceful transfer of power if he loses election
2 Swedish expert backtracks on herd immunity for Ireland
3 Five lessons I learned preparing my house for sale
4 Shelbourne Hotel statues to be restored to their plinths
5 Miriam Lord: Micheál has Mary Lou pegged as a street angel and House devil
Real news has value SUBSCRIBE