The Irish Times view on EU-UK talks: going to the wire 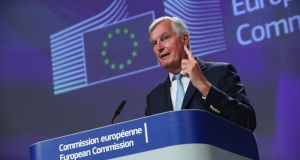 The Brexit clock is ticking. Just as he reminded us last year that time was running short before the deadline to conclude a withdrawal agreement, Michel Barnier, the EU’s chief negotiator, is back, this time using the same language about the urgent need to make progress on concluding a deal on future arrangements.

The UK is due to leave the EU trade bloc at the end of the year, but to allow this to happen in an agreed fashion a deal must be struck by the end of October. Barnier says he is “worried and disappointed” about the lack of progress to date.

It always looked likely that the talks would enter another crisis period in the autumn. The British government continues to talk tough and underline its willingness to leave without a deal if the EU does not shift its position. The EU insists that the UK must agree to abide by certain rules if it wants ongoing access to EU markets on a tariff-free basis.

It is clear, at this stage, that time is so short that the best that can be hoped for is a basic and not very ambitious trade deal. As Barnier said in his address to the Institute of International and European Affairs this week, this kind of deal is still worth fighting for, as it would avoid the imposition of damaging tariffs.

For Ireland, as ever in the Brexit process, the stakes are high. There will be disruption to trade whatever happens. However, failure to reach a deal would increase this and be particularly damaging for the food sector. And the Northern Ireland protocol, which outlines special trade terms for the North, will be more difficult to implement if there is no wider deal.

More talks are planned for next week. A range of issues – in areas like fisheries, State aid policies , governance and competition – were outlined by Barnier as needing progress. It would be tempting to call for urgent efforts to progress the talks and a more realistic approach in some areas from London. But doing so seems pointless. As ever with Brexit, there is a certain inevitability that this will again go to the wire.