The Irish Times view on Sinn Féin: think once, then think carefully

Scrutiny of the influences behind Sinn Féin, hidden or otherwise, will continue – and rightly so 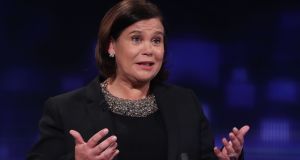 When Mary Lou McDonald spoke during the RTÉ Prime Time leaders debate about who Sinn Féin represents, it certainly wasn’t Breege Quinn whose son was brutally murdered in Co Monaghan by a gang believed to be associated with the Provisional IRA. Nor when she engaged in word games as to her party’s view of the Special Criminal Court, was she speaking for the victims of horrific crimes, the perpetrators of which that court has jailed. Many of those convicted were members of the IRA.

None of this is surprising. SF’s relationship with the IRA is a historic fact. The party does not pretend otherwise though it is adept at spinning a self-serving narrative around it. Yet Paul Quinn was attacked in 2007. That is not a historical time frame. Memories of the past are dimming, however, and voters – now attracted to Sinn Féin in pursuit of a desire for change – may be unperturbed, unaware or be satisfied that the party has distanced itself from it.

That’s a result of the industry of Sinn Féin and its leading TDs who, in rejecting orthodoxy and convention in their approach to some of the biggest problems facing the State, have managed to tap into public dissatisfaction with the status quo. Want a response to the housing crisis? Eoin Ó Broin convinces when Eoghan Murphy blathers. Tired of exorbitant insurance costs? Pearse Doherty dons the mantle of consumer champion.

All of this is in the realm of “normal” politics as is the party’s radical – and risky – economic policy. So is McDonald’s success in portraying herself as an alternative to what she, pointedly, describes as “these two men” – Leo Varadkar and Micheál Martin. It has won Sinn Féin fresh support in opinion polls and created a political sub-brand, with prospective voters, especially women, speaking of supporting “Mary Lou” rather than Sinn Féin per se. How this is reflected at the ballot box on Saturday and whether this unpredictable campaign brings more surprises is anyone’s guess.

However, if Sinn Féin is to successfully negotiate the next stage of its transition from the political fringes – and potentially participate in a coalition government – McDonald and her colleagues need to earn the confidence, if not necessarily the votes, of a broader base of citizens. They have some way to go. When they rail against the establishment, jaded thinking and hidden influences that stymie change, they strike a chord with many and make valid points. But their bottom lines from a policy perspective remain unclear.

Continuing scrutiny of the influences behind Sinn Féin, hidden or otherwise, is justifed too. As it wrestles with its own evolution – with military-like secrecy – the obligation is on Sinn Féin to demonstrate it has made progress. It is striking that McDonald failed so spectacularly to do so in front of a TV audience on Tuesday when – predictably – asked about Paul Quinn and the Special Criminal Court. For some potential voters, this doesn’t matter. They want something different and, by accident or design, McDonald is the fresh voice speaking to them. Make no mistake though: for others, Tuesday’s debate provided further evidence that compounds deep-rooted fears.