The Irish Times view on Sinn Féin: getting used to scrutiny 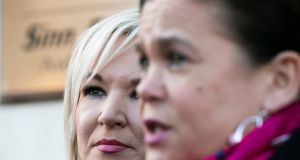 The recent general election remade the Irish political landscape and the biggest change was the success of Sinn Féin. Its electoral performance may not catapult the party into government – the Dáil numbers are not quite sufficient for that – but the results have certainly elevated the party into the front rank of politics, on a par with Fine Gael and Fianna Fáil.

The most casual observer of Irish politics knows that Sinn Féin is different. No other party supported and assisted in the IRA’s three decades of violence – a campaign that had no moral, political nor democratic legitimacy. The end of that campaign and the redirection of the republican movement is the best thing to have happened in Ireland in the past half-century. Its leaders deserve credit although they could – and should – have acted much sooner. And before they made peace, they made war.

The party has not always welcomed the greater degree of media interest and the accompanying questions about its past, present and future. But it needs to face up to it

There are other great differences between Sinn Féin and other parties. Indeed, the party proudly acknowledges these, insisting that it wants to remain a party led by “activists”, not elected politicians. Those differences are not necessarily sinister, but there are legitimate questions about the sometimes authoritarian nature of the organisation, its difficulties with bullying, its attitude to the institutions of the State, its decision-making procedures and how it intends to use the money in a recent €4 million bequest consistent with party funding laws.

Politics in the republic will have to adapt to the new reality that a strong Sinn Féin represents. But Sinn Féin will have to adapt too. With electoral success comes greater power, and with greater power comes more scrutiny. The party has not always welcomed the greater degree of media interest and the accompanying questions about its past, present and future. But it needs to face up to it. The questions and the scrutiny will not go away; nor should they. This is not, as some in the party’s army of vocal online supporters have it, an establishment conspiracy to damage Sinn Féin. It is part of the normal and healthy process of politics and public debate in a democracy.

1 We need to pay very close attention to what is happening in Britain now
2 Irish tourists excluded from visiting Greece as country begins its tourism season
3 Connell losing touch with the club championship is the real tragedy of Normal People
4 Remaking Ireland: Five positives from the pandemic
5 50 things to do in Ireland this summer
Real news has value SUBSCRIBE