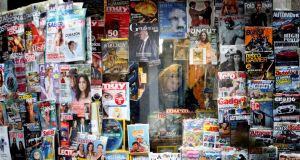 The pandemic is being used as an excuse to clamp down on the autocrats’ oldest enemy: the independent press. Photograph: EPA/CABALAR

Since the earliest days of the coronavirus outbreak, autocratic governments have sought to control and suppress information on the disease. Using censorship and intimidation, China prevented the truth about the scale of the Covid-19 from getting out until mid-January, more than a month after the virus was first reported in Hubei province.

It’s no accident that the most open states have produced some of the most promising results in the fight against the virus. By opting for almost total transparency, Singapore and South Korea ensured high levels of public compliance with public health measures and empowered citizens to make informed, responsible decisions about their own behaviour. A contagious and deadly respiratory disease cannot be fought with the classic dictator’s playbook; it cannot be shot, disappeared or simply denied out of existence.

But that hasn’t stopped some governments resorting to old tactics. Reporters Without Borders, an advocacy group, says that under various pretexts – avoiding panic, countering alarmist fake news or persuading the public to comply with health directives – states have used fines, arbitrary detention and withdrawal of accreditation to tighten their control over national media.

In Russia, several media outlets have been told to remove reports suggesting the infection rate may be higher than official figures. In Saudi Arabia, huge fines for individuals deemed to be sharing fake news are regarded as a thinly veiled means of evading any scrutiny. Eight Turkish journalists have been interrogated over their Covid-19 reporting and, in Belarus, the editor of a news website was arrested after he ran critical coverage of the state’s handling of the crisis. In Hungary, journalists worry that Viktor Orban’s new powers to rule by decree will enable him to widen his campaign against press freedoms.

Yet no amount of censorship will protect a badly-run state from this terrible virus. By seeking to conceal their own failings, and in the process further endangering their own people, autocrats themselves stand to pay a heavy price.

5 Long Covid in children: New data is cause for concern, scientists say