The Irish Times view on Islam in France: Laïcité under the microscope 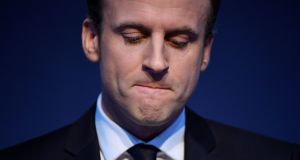 Macron’s reaction to the decapitation of the school teacher Samuel Paty on October 16th consisted of a strong reaffirmation of core values of the Republic – “laïcité”, secularism, and a Voltairian absolute right to free speech, including the right to blaspheme. Photograph: Lionel Bonaventure /AFP via Getty Images

A weekend interview by Emmanuel Macron saw France’s combative president in a more bridge-building, conciliatory mode. Following a series of speeches in which he had unapologetically and provocatively defended his country’s right-to-blaspheme laws, and had spoken of France “at war”, apparently, some felt, against all of Islam, he told Al Jazeera that he “understands and respects” the feelings of Muslims shocked by the display of cartoons of the Prophet Mohammed. And he argued that the “radical Islam” he is trying to fight is a threat to all people, especially Muslims.

Macron’s reaction to the decapitation of the school teacher Samuel Paty on October 16th consisted of a strong reaffirmation of core values of the Republic – “laïcité”, secularism, and a Voltairian absolute right to free speech, including the right to blaspheme. It came just days after he had also announced a new government programme “to strengthen laïcité and consolidate republican principles” to combat what he calls “separatism”. He had spoken provocatively of Islam as “a religion that is in crisis all over the world today”.

His critics see Macron’s radicalism as an attempt to recapture political ground lost to the far right in France but, internationally, it has fed perceptions of Islamophobia, and led to protests across the Islamic world with calls for boycotts of French produce. Demonstrations have spread from Iran, to Qatar, Kuwait, Pakistan, Bangladesh and Somalia with strong words and threats from Turkey’s President Recep Erdogan.

Yet the clash between Macron and Erdogan has to be seen in a broader context – both share ambitions to be seen as leaders of their regions, championing in the French case a vision of an interventionist Europe as a bulwark against radical Islamism. Erdogan casts himself as spokesman and defender of the Sunni Muslim world.

The two men are also involved in serious international spats, over Turkish attempts to drill disputed gas in the eastern Mediterranean, over Libya, where both have intervened to support opposing factions, in Syria and Nagorno-Karabakh.

Macron is struggling internally with an inability to promote laïcité in a way that does not stigmatise and alienate the whole French Muslim community by forcing on it a prescriptive policy of assimilation. France’s form of secularism has become not only about separating religion from state institutions but is seen by too many, on the far right and within the Muslim community alike, as a blunt tool for confronting Islam.

Free speech also poses challenges. How do you explain to an angry youth in the suburbs the distinction between the state’s defence of the right to insult his faith, and its willingness, in theory, to challenge and prosecute the hate speech or incitement to hatred he faces daily, but in practice its failure to do so?