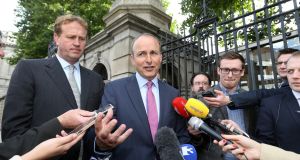 The refusal of Jim O’Callaghan to accept a junior ministerial post after his failure to make the Cabinet has contributed to the uncertain mood in Micheál Martin’s Fianna Fáil. Photograph: Sam Boal/RollingNews.ie

The leaders of Fianna Fáil and Fine Gael have attempted to rectify the regional imbalance in the Cabinet by appointing a number of junior ministers from the western seaboard but the howls of outrage from some of those omitted from the second tier indicates that Taoiseach Micheál Martin still has a problem on his hands.

Willie O’Dea’s claim that his failure to get a post represents an insult to the people of Limerick city is clearly self serving, as is the similar claim by Cork North West TD Michael Moynihan that his community has been insulted. Coming in the wake of the public expression of annoyance by Fianna Fáil deputy leader Dara Calleary at his omission from the Cabinet, it is not the best of starts for the new Taoiseach.

Martin’s decision not to appoint Calleary to cabinet was strange, given the Mayo TD’s status in the party and the fact that his omission meant no cabinet Minister west of the Shannon. It is arguable that the post of Government chief whip is actually more important than the portfolios occupied by some cabinet ministers but Calleary’s public expression of disappointment revealed the depth of his anger. The fact that two more disappointed TDs have now publicly challenged the decisions taken by their leader has given a somewhat chaotic air to the new Government’s first week in office.

The danger is that it could be a foretaste of things to come, given that far more important and controversial decisions will have to be taken by the Government in the months ahead. The Taoiseach will have to command greater authority and the coalition will need to display discipline and cohesion as it faces up to a whole range of issues so it must hope the controversies of recent days are nothing more than an early blip.

The refusal of Jim O’Callaghan to accept a post to serve the State as a junior minister after his failure to make the Cabinet has also contributed to the uncertain mood in Fianna Fáil. He has proclaimed that the party needs a strong voice outside government to ensure its identity is protected during the lifetime of the coalition. O’Callaghan lacks a strong base within the party, but nonetheless this sounds an ominous note and gives the impression that he is positioning himself to be a critic of Martin.

Leaving the disgruntled aside, the selection of junior ministers has a wide geographical spread. There were some inevitable imbalances given that there was no option but to have three senior ministers in Cork South Central and, in any case, not every constituency can have a minister.

What is more striking – and worrying – is the failure to have a greater gender balance at both senior and junior levels. Just four of the 15 Cabinet ministers are women and only five of the 20 junior ministers. This is not nearly good enough and reflects badly on all three coalition parties.