The Irish Times view on Covid-19 TV : Repeats, and repeats of repeats 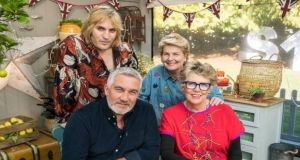 Great British Bake Off: nowhere to be seen.

Late August has been cancelled. Since 2010, that period has welcomed the first episode of the year’s Great British Bake Off.. Even those who abhor the nice people with their polite pavlovas will admit the show heralds autumn in the same way the World Snooker Championship heralds summer. The snooker has just ended. Great British Bake Off is nowhere to be seen. All order has fled the planet. Get ready for the first cuckoo of winter.

The pandemic has done for short-order television. In June, EastEnders suspended its catalogue of everyday urban despair for the first time in 35 years. Fair City, RTÉ’s more jovial equivalent, had already gone into temporary exile.

Meanwhile, the schedule has yielded to repeats. The BBC is showing all five seasons of bent-copper epic Line of Duty. The soaps are running greatest hits. When RTÉ gets round to making a Reeling in the Years about 2020 they could reasonably fill it up with endless shots of people watching endless reruns of Reeling in the Years. Last week worked through the noughties. Give it a few days and they will have reset to the JFK assassination and Vatican II.

So, has Covid condemned us to what an estate agent might call “vintage television”? Not really. August has always been a time for throwaway rubbish and tired repeats. It is usually silly season for media outlets. It is the season of “another chance to see” for TV programmers. Nothing new.

In truth, we are still in a phony war. We have not yet experienced the result of high-end drama ceasing production for the summer. At some point in the next six months we are going to run out of the glossy shows that generate chatter at virtual water-coolers. Line of Duty shut down its Northern Irish production in March. Peaky Blinders went into suspension at the same time. EastEnders and Fair City will return in September. A socially-distanced Great British Bake Off is due before year-end. But don’t hold your breath for season four of Stranger Things.

What’s that phrase we keep hearing? It’s going to get worse before it gets better.