The Irish Times view on Catalonia’s referendum: one year on

An agreed, Scottish-style referendum may be necessary to clear the air 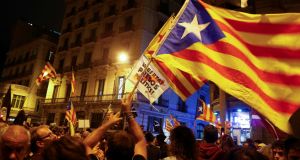 A year ago this week, Catalan nationalist parties held an independence referendum that the Spanish courts had declared illegal. The right-wing Partido Popular (PP) government dispatched police from outside Catalonia to prevent voting taking place. Their violent tactics shocked the world and escalated a political dispute into a national crisis that could still destabilise the EU.

Heavy-handed police actions confirmed, for Catalan nationalists, their narrative that Spain is an anti-democratic colonial power. But, for Spanish nationalists, and among the many Catalans who simply want their region to stay in Spain, the referendum confirmed the opposing narrative: an extremist minority was organising a coup and had to be vigourously suppressed.

It is vital that wiser voices prevail, which place the wellbeing of all citizens above the slogans of partisan identity politics

These narratives are more deeply embedded than ever in Catalonia, which is almost evenly divided between supporters and opponents of an independent republic. The jailing of nationalist leaders has injected fiercer passions into these polarised ideologies. The mass independence movement was largely sparked by the PP’s prolonged refusal to engage with Catalan aspirations for greater autonomy, even when expressed constitutionally.

Last June, the PP’s obdurate prime minister, Mariano Rajoy, was ousted by Pedro Sánchez of the Socialist Party. His more flexible approach offers some hope of détente. His government has conceded that last year’s police actions were an error. However, the strident response of some Catalan leaders to Sánchez’s overtures, and escalating street provocations since the weekend, suggest that much of the Catalan movement is trapped by its own rhetoric. On Monday, the Catalan first minister appeared to encourage radical demonstrators in their attacks on his own police force, and his own parliament.

It is vital that wiser voices prevail, which place the wellbeing of all citizens above the slogans of partisan identity politics, in Barcelona as much as in Madrid. However, it’s equally true that an agreed, Scottish-style, referendum may be necessary to clear the air.

1 Ireland’s official coronavirus death toll likely to have been overstated, report finds
2 Storey funeral a reminder that IRA army council runs Sinn Féin
3 Keep our money if you must, Ryanair. We’d rather lose our airfares than board our flight
4 Bobby Storey: The IRA's planner and enforcer who stayed in the shadows
5 Dara Murphy leaves EU job after just seven months
Real news has value SUBSCRIBE