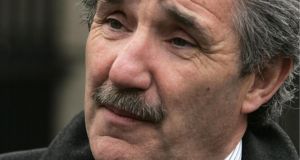 The plan by three Independent Alliance ministers, including John Halligan, to embark on a ’peace mission’ to North Korea confirms the view that they have a fundamentally frivolous approach to high office. Photograph: Dara Mac Dónaill

The involvement of three Independent Alliance Ministers in the ludicrous North Korean escapade has exposed the vulnerability of the Fine Gael-led minority Government to a political accident.

The sense of security about the Government’s stability, which developed after the passage of the budget through the Dáil last month, has been shaken by the irresponsible behaviour of the three Ministers. While the general political reaction to the episode has been one of hilarity at the apparently now cancelled “peace mission” to Pyongyang, it exposed an issue which could damage the Government’s credibility.

One of the long-accepted and clearly understood principles of democratic government is that ministers are not entitled to embark on freelance foreign initiatives which fly in the face of government policy. The forced resignation of UK international development secretary Priti Patel for engaging in a bout of personal diplomacy in Israel without the authorisation of her prime minister and government is a case in point.

Taoiseach Leo Varadkar responded indulgently to the North Korea demarche by his Coalition colleagues but there is no escaping the fact that the behaviour of the three Ministers was dangerous and unacceptable.

In the light of the associations between his former party, the Workers’ Party, and North Korea, John Halligan’s willingness to contemplate a mission to that country may be understandable, if wrong. But how his Ministerial colleagues, Shane Ross and Finian McGrath, agreed to go along with the plan beggars belief.

It confirms the view that the three Independent Alliance Ministers have a fundamentally frivolous approach to high office and are wedded to publicity stunts rather than serious work on behalf of the people they were elected to serve.

The angry response of the two other members of the Independent Alliance, Kevin “Boxer” Moran and Seán Canney, at the way they have been exposed to ridicule by their colleagues’ behaviour indicates how damaging the episode has been to them all.

Another issue which damaged the alliance was the Workplace Relations Commission award of €7,500 to a female civil servant over comments made by Halligan while interviewing her for a job as a ministerial private secretary.

Having said during the interview that “I shouldn’t be asking you this”, the Minister went on to ask the woman whether she was married or had children.

Tánaiste Frances Fitzgerald told the Dáil yesterday the Minister’s questions were “discriminatory and unacceptable”, and Halligan has said he will pay the award out of his own pocket rather than let the taxpayer pick up the bill for his error.

It’s the least he should do.

1 Miriam Lord: Does anyone care if Leo smoked or snorted?
2 A vegetarian and a non-drinker visit Ireland: here’s their verdict
3 Asylum claims by Georgians and Albanians brought to abrupt halt
4 Child (4) died of viral infection following nap at Cork creche
5 Cycling or swimming, walking or yoga: What is the best exercise for you?
Real news has value SUBSCRIBE